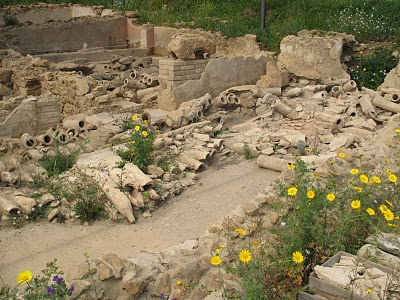 (Thanks to Mark Schara for the use of his photographs)
The North Baths of Morgantina, in east central Sicily, date to the 3rd century BCE and may in fact represent the earliest dome that has been excavated in the ancient Mediterranean world. Like everything in the buried settlement of Morgantina, it was built before the Roman conquest in 211 BCE. This new evidence suggests that Hellenistic Greeks, not Romans, invented the first dome. However, unlike the concrete used by Romans to make domes, the construction material would have been terra cotta tubes found on the site; the sizes and formation of these tubes suggest they were used to make a domed space. 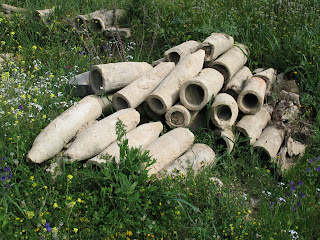 Public baths were a staple of the ancient towns and cities. Morgantina was a small settlement and the dimension of its baths are modest. Yet the roofing of the North Baths structure appears very significant. Two oblong rooms and one circular room were found to have curved ceilings made of these interlocking tubes, held together inside and out by plaster. They would have formed perfect arches when fit together, and each arch when placed in parallel alignment with other arches forms either a barrel vault or dome. There were two barrel vaulted rooms and one with a dome. 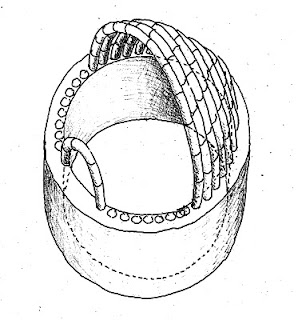 This method was also used in
the Roman baths of North Africa in the 3rd century CE, while builders in Rome were using concrete. The Morgantina baths are at least 4 centuries earlier than the others of this technique and predate Roman concrete vaults and domes by about a century.
Interlocking cotta tubes made in the Hellenistic settlement of Morgantina were
fit into each other to form arches. Arches placed adjacent to each other could form a dome, above, or barrel vaults, with masonry reinforcement as shown on the right. 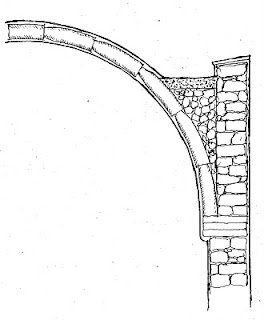 Although some excavation began in the early 1900s, archeologists identifed Morgantina as the archeological site in 1958 using coins. The place had been described by Strabo and some early Roman writers, but it was abandoned by the end of the first century CE. Originally a Sikel settlement, it was occupied by Greeks in the 5th century BCE, conquered by Rome in 211 BCE and consequently taken over by Spanish mercenaries of Rome. In addition to baths, Morgantina has an agora, a theatre, graneries, an ekklesiesterion, several sanctuaries, homes with mosaics and two kilns which have been excavated.
An overview of Morgantina reveals the Greek theatre and other excavation structures. 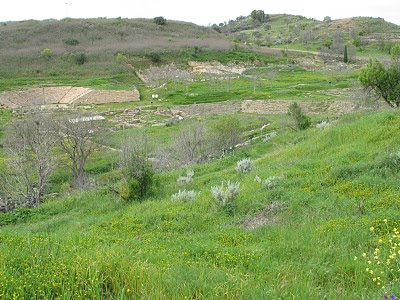