The Gentler Side of Caravaggio 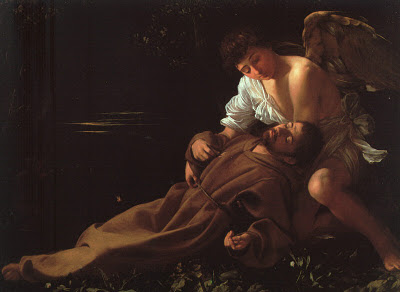 Saint Francis in Ecstasy, from the Wadsworth Atheneum in Hartford, CT, is in the Kimbell Art Museum’s exhibition, Caravaggio and His Followers until January 8
One painting in the Kimbell Art Museum’s Caravaggio exhibition (today is the last day) reveals an unexpected side of Caravaggio’s nature. St. Francis in Ecstasy, from the Wadsworth Athenaeum in Hartford, CT, is poetic. Parallel lines of light on water to the left lead to a very sweet angel holding St. Francis.  The saint  has swooned after receiving the stigmata, the wounds of Jesus. In dead center, St. Francis’s foreshortened hand vaguely reveals this hole representing the nail that went into Christ’s hand.
Intentionally I have refrained from writing about the type of paintings for which Caravaggio is most famous. The Boy Bitten by a Lizard and The Sacrifice of Isaac (in the Kimbell exhibition) cause discomfort and hit us in the gut. As Isaac is about to be killed by his father Abraham, he looks out of the painting and appeals to the viewers. We feel the boy’s fear, but an angel rushes in to stop the father from killing him. Saint Francis is a much gentler vision, but like the other paintings, it concentrates on a crucial, transitional moment.

nted both joy and extreme pain, much like the extremes of his own life.


Detail of The Sacrifice of Isaac: Caravaggio’s Isaac calls out for sympathy. We feel his fear and pain
Copyright Julie Schauer 2010-2016 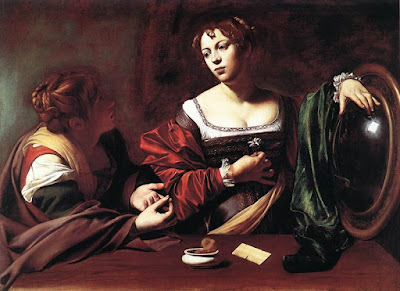 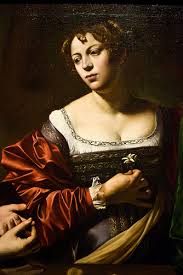