The amazing unknown master in an Art Institute exhibition

by Julie Schauer | Apr 5, 2011 | Christianity and the Church, Renaissance Art, The Art Institute of Chicago

This Crucifixion from the Getty Museum is the center of a 3-part altarpiece which can be seen at the Art Institute in its original format until May 30th. The unknown master used saturated colors in oil paint, while packing an incredible amount of detail into a panel 19 x 28 inches. Click on the photo to see an enlargement.

The Art Institute of Chicago is currently showing a major exhibition of French Renaissance painting, Kings, Queens and Courtiers. To me, the most impressive and interesting piece is by an unknown painter, the Master of Dreux Budé. It dates to about 1450.

One of the values of this type of scholarly exhibition is the opportunity to find and gather lost or separated parts of paintings. Here, we view the original pieces of what was once formed a triptych, three panels connected by hinges to tell a concise history of Christian Salvation. The largest painting was in center; it’s a Crucifixion from the Getty Museum in Los Angeles. The Resurrection, from the Musée Fabre in Montpellier, France, was once a wing on the right side.

It’s a special treat to see the left panel, The Kiss of Judas or Betrayal of Christ, which starts this Passion, Death and Resurrection story. (The painting is in private hands, therefore rarely seen and photographed.) This artist’s conception is very original; Judas’ kiss of betrayal is set in the darkness of night with moon, stars and faces as the light which heightens the drama of Christ’s arrest. Suddenly we notice a crowd of soldiers that is emerging from behind. The Crucifixion in center continues the story in a daytime landscape and tells multiple episodes as well, including the Harrowing of Hell on the far right.

f the painting is a masterpiece by itself but more complete when grouped together. The unknown painter is a vivid and imaginative storyteller.

A few suggestions for the identity of this painter have been made: Andre d’Ypres or Colin d’Amiens. We know of the patrons: Dreux Budé, a wine merchant, and his wife, Jeanne Peschard. The three-part painting, called a triptych, was for the altar in the Budé family chapel of Saint Gervais, Paris. A Crucifixion in the Louvre, Paris, is by the same painter, who may have learned from Rogier and/or Robert Campin in the guild of Tournai.

A double-mouth demon and sinners in a cauldron, above left. In the bottom left of the Crucifixion is a demon in Hell whom Jesus encountered while going there to rescue Adam and Eve. The photo is courtesy of Dawn Pedersen of Blue Lobster Art & Design. 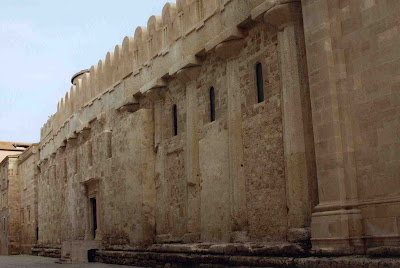 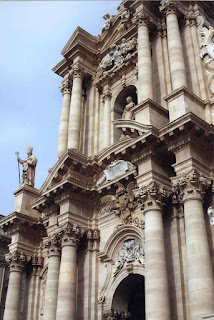 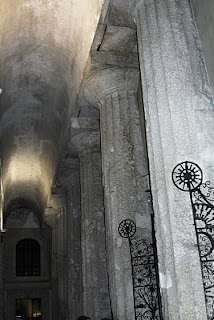 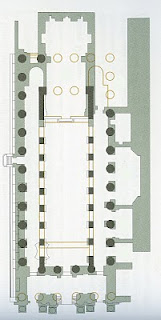