The Words of Art and the Art of the Word

At least four exhibitions on the Mall, at the National Gallery of Art and Hirshhorn Museum, take a look at printed word in painting and other art forms of the past century.  Chronologically, these exhibits begin with the avant-garde artists of circa 1910 at the National Gallery of Art’s “Shock of the News” exhibition.  They end with today’s leading provocateur-artist, Ai Weiwei of China, at the Smithsonian’s contemporary art museum, the Hirshhorn.   So we search for the meaning of the word in art.

In 1902, Jean-Léon Gérôme, a leading academic artist of the day, painted O PTI CIEN, a puppy wearing a monacle. The letters suggest a reading of “au petit chien” (“at the little dog”), which would sound approximately like  Oh P T shee-en to the French.  But the letters also form the French word for an optician. This work actually was a competition for an advertisement, but Gérôme’s humorous pun set the stage for the Cubists, Surrealists and other artists who brought the painted word into prominence: Picasso and Georges Braque, Dada artists and even Surrealists like Magritte.

The intersection of the news media and visual art is the subject of the National Gallery’s Shock of the News.  This cultural force burst onto the scene around the 2nd decade of the 20th century, when an Italian group, the Futurists, published their manifesto in 1909.  Pablo Picasso and Georges Braque were soon incorporating collage into Cubism and using words from the newsprint to articulate their artwork. Guitar, Sheet Music and Glass, 1912 has the masthead from “Le Journal,” a Paris daily.  The letters Jou appear as reminders of le jour, meaning day, journal, the daily newspaper and jouer, which means to play.

That last word is the key, because modern art, if anything, is playful and ironic. If you can’t make the world better, why not laugh about it?   The Dadaists, who followed Picasso, were despondent over the established civilization and the horrors of World War I.  Particularly in urban centers of Germany and in Paris and New York, they couldn’t fight the world, so ridiculed it.  Their art is full of newsprint, ready-made objects and things not expected to part of aesthetics.   Hannah Hoch’s collages are particularly playful and  interesting
Hannah Höch  Von Oben (From Above), 1926-1927  photomontage and collage on paper 30.5 x 22.2 cm
(12 x 8 3/4 in.)Des Moines Art Center’s Louise Noun Collection of Art by Women through Bequest, 2003

Semen Fridliand’s photo halftone image, The Venal Press, above center, is a commentary on the public’s capability to let the press influence their to beliefs in everything.  How much greater that power is with the blogs, the facebook and Twitter of today!

Of course, Picasso continued to respect the power of print media in Guernica, of 1937 (not in the exhibition), which is his commentary the first time a bomb was dropped from air, hitting the Basque city of Guernica in Spain.  He wanted the monumental, 25-foot painting to have journalistic quality and therefore imitated the lettering of newspapers, while painting only blacks, whites and grays.

On Kawara painted the date, October 27, 1971, in white on a black canvas.  It is one of over 5,000 such images his has done over many years.  Each painting goes along with a cardboard box and cover and the packing functions as a time capsule, because the news of that day is place in the box with the painting.   After leaving the Shock of the News exhibition, National Gallery visitors move onto the next exhibition, Roy Lichtenstein: A Retrospective.

First and foremost, we think of Roy Lichtenstein (1923-1997) as the artist who transformed the art of the comic book into a higher form of art.  As a Pop artist, he is often eclipsed in reputation by Warhol.  This large exhibition brings together works from his entire career, encompassing several themes.  Throughout his long career, he used bold colors and ben-day dots.  The dots imitative of a printer’s dots for the comics and newsprint remain a consistent signature of his style, but Lichtenstein’s late work parodies earlier art history using few words. His images of the 1960s borrow from cartoons, but he added captions and details to complete the compositions.  His captions capture the spirit and humor of certain cultural icons like Mickey Mouse and Donald Duck.  Other large cartoon-like images fill rooms on the specific themes of war and romance.  He uses boldness, humor and a surprising amount of emotion in a simplified style.

The bold, sans serif letters of Barbara Kruger overwhelm the ground floor of the Hirshhorn right now.  The exhibition, called Belief + Doubt = Sanity, uses words in every way to make us think. Kruger was a graphic artist before she became a fine artist and the heritage of graphic art remains part of her style and her appeal, much like it did for the Pop Artists before her.  The stairs and adjoining rooms are dressed in bold letters using only black, yellow, red and white, an overwhelming effect.  Her messages are arresting, questioning thought about politics, consumerism and all sorts of aspects of contemporary life.  We realize the dichotomy of much in the world in which political banter stems from belief in one truth.  The only sane way to evaluate it is with a blend of belief and doubt.  Her art functions to ask questions, to question the cultural norms and to make us stop to think.  As we ponder one of her bold messages, we recognize ourselves in the lines:  “YOU WANT IT, YOU BUY IT, YOU FORGET IT.”

The Ai Weiwei exhibition, According to What (named after a painting by Jasper Johns currently in a Philadelphia Museum of Art exhibition, Dancing around the Bride), is on the 3rd and 4th floors of the Hirshhorn.   Like many contemporary artists, Ai Weiwei doesn’t limit himself to one medium; he does photographs, sculptures installations.  He critiques American and Chinese governments, most notably the shoddy building construction which led to the death of 4,000 plus children in an earthquake. Ancient culture and modern life clash, but come together in Coco-Cola vase. He disrespects tradition but forces us to think how consumerism, corporate marketing and globalism meet ancient culture.

The works of Ai Weiwei and Barbara Kruger entertain, but those artists also challenge us and make us think more than Pop Art does.  This summer I saw another contemporary, conceptual artist’s work at the Institute of Contemporary Art in of University of Pennsylvania, Philadelphia.  Stefan Sagmeister’s The Happy Show, is also the work of a graphic artist, like Kruger. The words printed are in black on a yellow ground, the typeface combination that can be read most easily in the mode of the yellow pages. Yellow is the happiest of colors.  Sagmeister made me think of a  modern “pursuit of happiness” written into the Declaration of Independence.  The exhibition questioned, provoked, entertained, tried to make us laugh and added one more valuable asset, encouraging happiness.  If we recognize the paradoxes that Barbara Kruger and Ai Weiwei demonstrate, it’s possible to use the art of the word to promote not just “JOU” (play), but also joy in the world, or joy in the word. 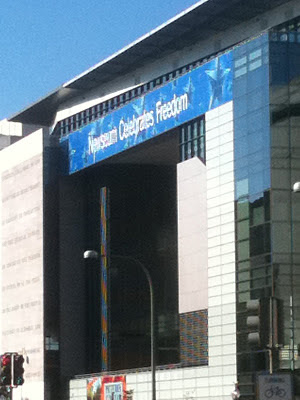 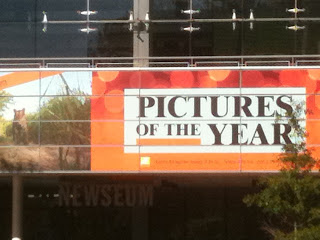 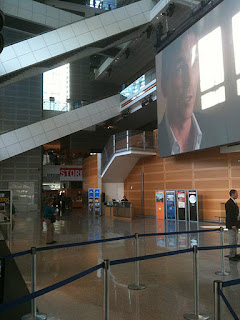 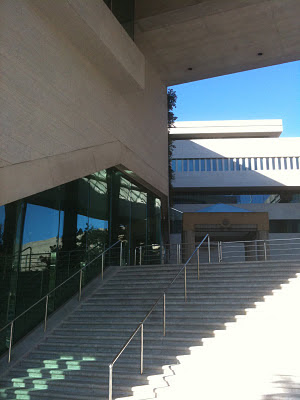 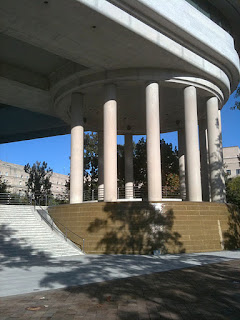