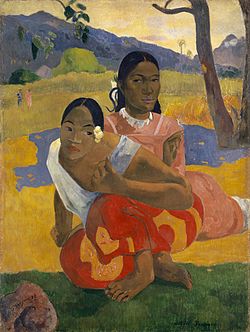 Gauguin, Picasso, Rouault and Split Identities in the Phillips’ show

The Phillips Collection’s latest loan exhibition, “Gauguin to Picasso: Masterworks from Switzerland,” draws upon a pair of collections assembled by two prominent but very different Swiss art collectors. To me, the theme of dualism, pairs and split identities stands out strongly.  The exhibition highlights one of Gauguin’s most famous paintings, When are You to be Married? — a painting that recently was sold.  (The Staechelin and Im Oberstag collections of modern art are normally on display at the Basel Kunstmuseum. Here’s an article for background on the collectors why the paintings are traveling.)

Like so many other paintings by Gauguin, the two women in this infamous painting express two realities, which could represent the split identities within Tahitian society. He painted it during his first stay in Tahiti in 1892. The woman in front is natural, organic, relaxed and colorful in her red skirt. The orchid in her hair was said to suggest that she is looking for a mate.  A woman behind is taller, more severe and covered in a pink dress buttoned to the top–an influence of Western missionaries. The woman in back has a bigger head than the woman in front.  Does he mean to imply that she dominates? Or, is Gauguin imagining a single Tahitian woman who is torn between her native identity and the invasion of western civilization.

The woman in front may be inspired by one of the very beautiful, sensual women painted in Delacroix’s Women of Algiers, one of my all-time favorite paintings. (Delacroix was allowed into the mayor’s harem to sketch the women–pictured at right.  Like Gauguin, Delacroix was European observing women in an exotic, foreign land.)

In his self-portraits and so much of his art, Gauguin expresses the split nature in mankind, the areas where there is inner conflict. Symbolist Self-Portrait at the National Gallery of Art (NGA), Washington, is a divided person, both a saint and a sinner.  He has a choice in the matter, and we wonder what he’ll choose.

The two Tahitian women are different, yet blended.  Warm brown skin tones unite them and the hot red skirt of the “natural” native woman flawlessly flows into the warm pink of the stiffer, “civilized” woman. The colors blend and contrast simultaneously into a beautiful harmony.  (Is it surprising that this picture was the most expensive painting ever sold?  Rumor has it that it was purchased by a Qatari for Qatar Museums.)

Other artists in this exhibition continue the theme of duality and split personality. Early 20th century Expressionist Georges Rouault was honest about his identity as a person belonging in another century, the age of the cathedrals.  His heavily-outlined Landscape with Red Sail uses colors reminiscent of the colors in stained glass and the way stained glass is divided by lines of lead. Yet, his paint is applied in a very rough, heavy manner, hardly like the smoothness of glass. His beautiful seascape does, however, evoke the light of a sunset peaking behind the sailboat–like the light filtering in medieval churches.

The Expressionist painter Alexej von Jawlensky was a Russian living in Switzerland, in exile there during World War I.  There’s a haunting quality to his Self-Portrait, left. Jawlensky and Im Obersteg had a strong friendship throughout his career.

One side of a Picasso painting features a woman in a Post-Impressionist style, “Woman At the Theatre,” and the other side has a sad woman, The Absinthe Drinker, from the beginning of the “Blue period.” Both were painted in 1901. They could not be more different from each other.  Picasso  was very experimental at that

time of his life and in his career.

Expressionism is a large part of the exhibition, especially with Wassily Kandinsky, Chaim Soutine, Marc Chagall and Alexej von Jawlinsky.  Swiss Symbolist Ferdinand Hodler shares with us his experience of love and death in a group of paintings of his dying lover Valentine Gode-Darel.  It is difficult to watch and for him painting may have been an attempt to make peace with the awful situation.

The series of paintings by Hodler are some of the most powerful in the exhibition because we experience the unfolding of a tragedy.  Gode-Darel died of cancer in

1915, a year after diagnosis.  The three paintings of rabbis by Marc Chagall continue in the theme of portraiture.

There are very fine small paintings by Cezanne, Monet, Manet, Renoir and Pissaro, two beautiful landscapes by Maurice de Vlaminck. Van Gogh’s, The Garden of Daubigny, 1890 is one of three he did of the same subject weeks before his death. The black cat in the painting is small but curiously out of place. The 60 paintings on view, on view until January 10 — are worth the trip to the Phillips. Here are some of the best photographs of the paintings in the show. These Swiss collections complement the Phillips own marvelous collection of early Modernism.  It is curious that the Swiss collections don’t show the greatest of all 20th century Swiss artists, Paul Klee.