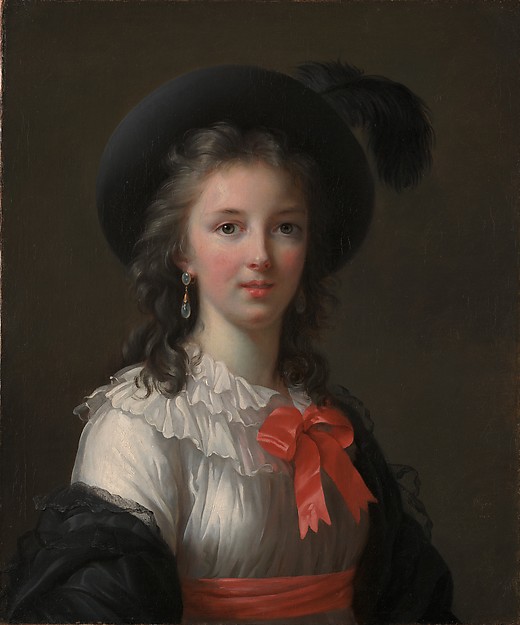 Vigée-Le Brun: Woman Artist of Revolutionary France is major exhibition at the Metropolitan Museum until May 15.  Élisabeth Louise Vigée-Le Brun’s Self-Portrait from the Kimbell Art Museum explains her quite well. She shines with the confidence and elegance of a woman who would eventually become an international superstar. It shows off her top-notch artistic skills. Touches of brilliant red for the ribbon, sash, lips and cheeks to add sensual pizzaz. Portraits are not my favorite genre of painting, but Vigée-Le Brun’s portraits are always dazzling. The light radiating through her earring is just the right touch. One reason we never hear her mentioned among France’s top ten or twenty painters is that she was a painter of royalty who supported the wrong side of the French Revolution.  It is only last year that France gave her a major retrospective, although her international reputation was strong back in her day.

Vigée-Le Brun compares well with Jacques-Louis David and the very best French artists of her time. For the most part, she was fairly traditional rather than an innovator.  Her style has elements of the late Rococo and Neoclassical styles, but with the addition of some naturalistic features. She was largely self taught, having learned from her painter father before he died when she was 12.  Her mother was a hairdresser. She set up her own studio at age 15, supporting herself, mother and younger brother.  After her mother remarried, she painted her stepfather, Monsieur Le Sevre (whom she really didn’t like, though I can’t discern it in the painting.)  She was only about 19 at the time she painted it, around the same time she entered the Academy of Saint Luke, the painter’s guild.

Vigée-LeBrun was earning enough money from her portrait painting to support herself, her widowed mother, and her younger brother. T – See more at: http://www.nmwa.org/explore/artist-profiles/%C3%A9lisabeth-louise-vig%C3%A9e-lebrun#sthash.AhJDfSMB.dpufsupporting herself, her mother and younger brother.   After her mother remarried, she painted her stepfather. The portrait of Monsieur LeSevre, is superb, though the artist was probably no older than 19.  Around the same time, she joined the Academy of St. Luke (the painter’s guild). She soon made her way to the top. A few years later, she was called to work at Versailles, becoming the personal painter of Marie Antoinette. She commanded some very high prices for her work.

In 1778, she painted Joseph Vernet, a distinguished older painter of seascapes whom she greatly admired.   He counseled her to always look at nature.  I had seen the Vernet portrait in a NMWA exhibition a few years ago, a monumental exhibition that brought to light many of the gifted female artists of the era. the Met describes Vernet as her mentor, and it’s easy see the affectionate expression in this portrait. It has a wonderful harmony of various blacks and grays.

Painters are sometimes divided into those who are great draftsmen (like Michelangelo and Ingres) or great colorists (like Titian and Rubens). Vigée-Le Brun combines drawing ability and an exquisite sense of color. (There are several drawings in the exhibition.)  Vigée-Le Brun’s father, Louis Vigée was a pastel artist and the self-portrait she did in pastel is just lovely. It combines loose, free lines with delicate, subtle modeling to make the face pop out.  What other artists can make black, white and gray so interesting?

Marriage, Her Husband and Daughter

In 1776, she married Jean-Baptiste-Pierre Le Brun, a painter, art dealer and a great connoisseur who fostered an appreciation of northern artists. He was the grandnephew of Charles Le Brun, founder of the French Academy. Together they traveled to Flanders and the Netherlands to study the northern artists. She was a greater painter than he was, but it was a connection of great mutual benefit for both of them. In 1780, a daughter, Jeanne Julie, was born. Julie became the subject of many of her mom’s paintings.  A real gem of the show is the portrait of her daughter looking in a mirror. It simultaneously gives us a frontal and profile view. It is also a very sentimental painting.

One self-portrait by her husband is in the exhibition. He was probably the most important art connoisseur and dealer in France in his time. Pierre Le Brun is credited with writing the most important book on Netherlandish art and elevating the reputation of one of the world’s most popular Old Masters, Johannes Vermeer.

In 1783, Vigee-Le Brun gained entry into the prestigious Royal Academy, one of only four women in the elite group.  There was some conflict of interest, because her husband’s profession as an art dealer could have disqualified her. However, King Louis XVI used his influence to promote her. Even at the relatively young age of 28, she commanded higher prices than her peers.

At the time, history painting, meant to instruct and moralize, was considered the highest category of painting.  The canvas she submitted for admission into the French Academy was an allegorical piece meant to inspire virtue, Peace Bringing Back Abundance.  As the name suggests, prosperity comes from staying out of war. While the classical Grecian style of this painting is not the taste of today, it’s her colors that I love. Unfortunately, peace would not remain in her life and in France for very long.

When Marie-Antoinette fell from favor and lost her life, Vigée-Le Brun had reason to be afraid. She left France for Italy, with her daughter and without her husband.  She was quickly accepted into the Accademia di San Lucca in Florence. She was asked to add her portrait to the the Corridoio Vasariano at the the Uffizi, an obvious sign that her reputation preceded her. This self-portrait in the Uffizi Gallery, painted in 1790, is one of her most famous paintings (below). According to the Metropolitan Museum, the ruffled collar was meant to show her affinity to Rubens and Van Dyke. The cap is reminiscent of self-portraits by Rembrandt, but the brilliant red sash and the use of color contrast is strictly Elisabeth Vigee – Le Brun.  It shows greater spontaneity than some of her royal commissions.  A few years earlier she had been criticized for breaking with convention by painting self-portraits with an open mouth, making them look less serious.

With her out of the country and the Reign of Terror going on in France, her husband was forced to divorce her. (When the aristocracy lost power, he also lost his major clients.) She remained in exile for 12 years, but painted in the Austrian Empire, Russia and Germany.  Her services as a painter were in high demand and she commanded high prices from her lofty, aristocratic clients.   In particular, she painted many Russian aristocrats, including one owned by the National Museum for Women in the Arts which is not in the current exhibition.

Portraits of Russian and Foreign Aristocrats

Many of the paintings on view at the Met are from private collections, suggesting that many portraits may still be owned by descendants.  None of her paintings from Russian museums are on loan to the United States, because of diplomatic problems at this time. The exhibition going to National Gallery of Canada in June will have several paintings from the Hermitage that are not in the New York show.  These paintings were included in the Paris, where the exhibition started.

Vigée Le Brun painted at least five portraits of Grand Duchess Elizabeth Alexyevna, but the example here has a sumptuous red cushion and a transparent purple shawl, that sets off nicely against white skin, dress and long flowing hair.

Vigée Le Brun also enjoyed depicting personifications and allegory, as did many of the artists of this era.  At one time she painted her daughter as the goddess of flowers, Flora.  When she painted the beautiful Duchess von und zu Liechtenstein, she imagined her as Iris, the goddess of the rainbow. The colors shine brightly, though a rainbow which I expected to discern in real life, at the exhibition can’t be found in the painting.

In general, she greatly flattered her sisters.  It would seem that she only painted women who were beautiful.  At the Metropolitan show, about 5/6 of the paintings portray female sitters.  She carefully considered all props, and how to reflect the personality of the sitter.  Vigée Le Brun figured out how to bring out their best features and reflect the personality of the sitter.

The use of materials, props and settings is crucial to her goals. A portrait of Countess Anna Ivanova Tolstaya has a large outdoor background taken from the natural world, a Romantic setting. The countess looks dreamy and wistful.  In general, there is a very wide variety to the types of colors she used, and the harmonies she created.  The National Museum of Women in the Arts currently has an exhibition on Salon Style, which includes portraits by Vigee Le Brun, among other French women artists.  An unattributed pastel of Marie Antoinette would appear to be by Vigee-Le Brun, too, or at least copied from a painting by her.

From a strictly historical perspective, however, her connections to the French Royal family may be the most important contribution.  From her many portraits of Marie-Antoinette, historians can look for clues into the life and character of this demonized queen.  It’s difficult to figure out if Marie-Antoinette was really as bad a person as history portrays her.  I saw the Kirsten Dunst movie about her and more recently a play about her, both of which show her as a tragic figure who was a foreigner and really didn’t really know how to fit into the world into which she married. We may never really know.   Marie-Antoinette may have wanted Vigée Le Brun to soften her image. Several portraits of her are in the exhibition. The bouffant, powdered hairdos don’t beautify her to me. Marie-Antoinette and Her Children, a large, flamboyant group portrait loaned shows the young queen with three children and an empty cradle.   It emphasizes that the Austrian-born queen had recently lost a child.  So even in this sumptuous setting there is great sadness and loss.

Madame Royale and the Dauphin Seated is a portrait of the two oldest children when the were around 3 and 6 years old. The princess’ satin dress is brilliant display of Vigee Le Brun’s skill at portraying texture. The pastoral background is nostalgic and adds to the sense of innocence.  It gives no hint of what’s to come. The prince died of tuberculosis in 1789, ate age 7. (Dauphin County, Pennsylvania is named after him.) Marie-Therese, named for her grandmother, was imprisoned between 1789 until 1795. She was queen 20 days in 1830 and lived until 1851, but generally had a very sad life.  There is actually one landscape painting in the exhibition (and there were several landscape drawings in the Paris exhibition), but Vigee Le Brun is first and foremost a portrait painter.

Between 1835 and 1837, Vigée Le Brun wrote her memoirs. A remarkably great artist and a remarkable woman, she lived to be 86.  She is appreciated much more than for her paintings of  many Marie – Antoinette. When I took a college Art History class that started with the French Revolution and went to about 1850, we didn’t cover Vigée-Le Brun. David, the academic teacher who influenced so many students, was treated like a god in my class. I find it curious that Vigée-Le Brun remained completely loyal to the royal family, while David was such a politician. He painted for the king, turned into a revolutionary and then easily switched gears to become Napoleon’s artist. He secured his reputation for posterity.  With this exhibition traveling to Paris, New York and Ottawa, Vigée-Le Brun’s reputations will go up a few notches, putting her in a rank equal rank to that of David. The Metropolitan has a complete list of paintings in the exhibition.  See the Met’s video of her.