Mourners are Something to Cry About 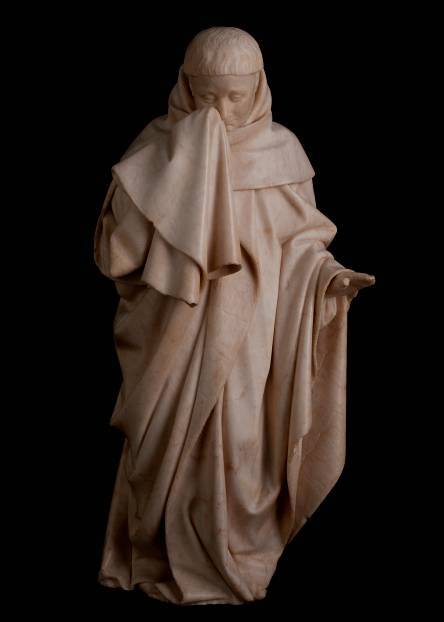 An exquisite of exhibition “mourning” statues at the Virginia Museum of Fine Arts, Richmond, have a beauty and realism that give us something to cry about, a phrase Michelangelo used to describe Flemish painting.

In the 15th century, Flanders was ruled by the Duke of Burgundy and similarities to the Flemish style of painting can be are apparent in the style of sculptors Jean de la Huerta and Antoine de la Moiturier. They learned their art from the great Claus Sluter, a Netherlandish sculptor who worked in Burgundy. The Dukes of Burgundy had one of Europe’s richest courts, in rivalry with the King of France to the west and Holy Roman Empire to the east.

The 40 statues line up as if in a funeral procession. At the exhibition, viewers have a chance to see the statues in more completeness and in a more realistic way than in the location they were originally placed, below the bodies of Duke John the Fearless (Jean sans Peur) and his wife, Marguerite. In the current display, the alabaster figures are seen as they move in space, without the elaborate decorative Gothic frames that confine them. They represent the clergy and family members who had been part of Jean the Fearless’ funeral procession in 1424. The statues are on loan from Dijon, France, while the Musee des Beaux Art is undergoing renovation.

Cowls and hoods identify these figures as mourners in the funeral procession. They are alabaster white with details such as books and belts painted. Larger effigies of the duke and duchess were painted in bright colors to look real.
Like Rogier van Weyden or the Master of Dreux Budé , these sculptors drew on both realism and emotionalism in a style that is on the cusp between the late Middle Ages and the Renaissance. The figures are white with a few painted color details, although mourners and even horses, in the funerary procession actually wore black, hooded robes. A tomb of Philippe Pot, Seneschal of Burgundy, from about 1480 has life-size, hooded black figures which hold up the tomb and give an even more realistic version of a funeral.

Life-sized, hooded, black pallbearers were carved anonymously c. 1480 for the tomb of Philippe Pot, Seneschal of Burgundy. They have a greater sense of actuality but less individual, emotional pathos of the group in traveling exhibition.
The small white, alabaster figures, however, are full of passionate emotion, and they move into a a variety of different positions. Their angular cuts of drapery are Gothic in style, but when seen in the round, as on display now, the statues have a 3-dimensional spatial conception of the Renaissance. Fortunately the artists carved them in the round, even though they are not seen this way in the Gothic niches underneath the life-sized, reclining duke and duchess. (In 1793, French revolutionaries damaged the effigies of the duke and duchess who represented the repression of the aristocracy, but left the mourners largely unharmed.) The statuettes are part of the funerary sarcophagus of Jean sans Peur and Marguerite of Bavaria in the fine arts museum of Dijon. The small mourners walk in a funerary procession but are covered by gothic canopies.

These figures call to mind all the mourning figure in art history who accompany the processions and burials of important historical people, and remind us of the processions like those of Roman emperors. Certainly “mourners” were part of the history of art going back more than 5,000 years. However, I couldn’t think of any mourners from early Medieval art because the Early Christians felt death as triumphant and not a matter of earthly pain.

Although the Burgundian court was probably aware of ancient Roman sarcophagii depicting mourners in the funerary procession, the classical Greek-style Sarcophagus of the Mourning Women has a comparable format. This coffin of c. 350 BC was for a king of Sidon, Lebanon, and the women on bottom were probably part of his harem. Each mourner is carved in relief, standing separately between half-columns, while a chariots travel in a frieze above, perhaps the funerary procession or the rulers trip into afterlife. The women twist and

turn and cry to show their various expressions of grief after the death of a leader. As usual, these mourners serve a god-like ruler, not ordinary citizens.

Eighteen women adorn the bottom of a sarcophagus of c. 350 BC, on view at that archeological museum in Istanbul

Early Greek funerary art attempts to show profound emotion. Both the ancient Greeks and Egyptians had elaborate burial ceremonies for their heroes or rulers that could last weeks or months. Mourners accompany pharoahs in their tombs, as the women below. 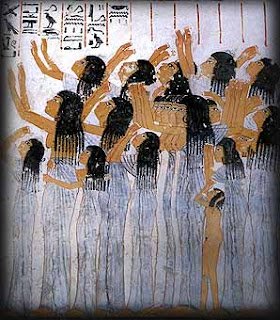 To the right, female “professional” mourners with raised arms who accompanied the great Ramses in his funerary procession are painted in his tomb. 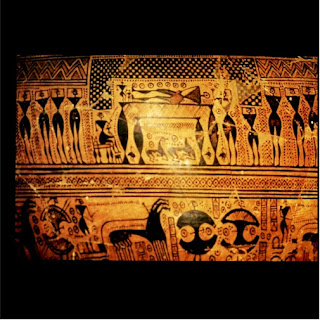 Detail from a Greek vase in the Metropolitan Museum of Art has rows of mourning figures on either side of the funerary bier. Similar vases come from a cemetery in Athens and they date to 800-700 BC.

The lives of fallen Greek heroes were celebrated with elaborate games, chariot races and processions, as in the funeral sponsored by Achilles for the death of his friend Patrokles. Geometric style vases, from the 8th century BC, are decorated with scenes from funeral procession. Schematic, stick-like figures raise their arms to show they are grieving for the deceased.   The figural design is a composite type: frontal torso, profile face and a single, huge eye.
Even older than Greek and Egyptian representations are two small terra cotta statues from Cernavoda, Romania, c. 4,000 BC. Found in a burial close to the Danube River, these statues could be mourning figures. The man’s arms are raised while the woman’s arm is on her knee, her shape suggesting fertility and hope for continuity. I can’t help but think these little figurines were made by the ancestors of Mycenaean or Dorian Greeks who in a later era migrated down into Greece. 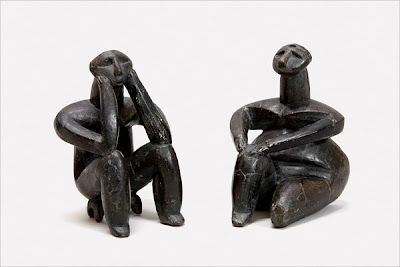 The male figure is sometimes called “The Thinker,” but these clay figures from Cernavoda, Romania may be mourners who accompany an important person in burial. The raised arms to show grief was later used by Greeks. They also remind me of Brancusi and Henry Moore.

The exhibition stays until April 15 in Richmond, the last destination in a 2-year, 7-city tour in the United States, including the New York Metropolitan Museum. Next they will go to the Cluny Museum on Paris before returning home. It will be interesting to see how they are displayed when they go home to Dijon.