The Fibers That Bind Us

“High fiber” usually refers to a type of diet, but High Fiber at the National Museum for Women in the Arts demonstrates how “high art” integrates with the everyday world of a Folk Art.  In the multi-media world of contemporary art, Fiber Art has gained recognition as a serious art form over the last fifty years.  Like the art of glass making, fiber art was invented milleniums ago for utilitarian purposes. Knitting, sewing and weaving developed to meet basic needs of warmth and clothing, but as soon as pattern and design were involved, the process of making art began.

When the ancient artists/crafters knitted, knotted, wove or stitched to follow patterns or innate designs in their heads, they tied together movements between the left and right hands, bridging the creative left side of the brain with the analytical right side of the brain.

Contemporary fiber art may or may not have definite recognizable patterns and designs, but fiber art by definition is very tactile and textural.   It may also be sculptural.

The National Museum for Women in the Arts’ exhibition of contemporary fiber artists, on view until January 6, 2013, features seven contemporary fiber artists, each working in styles completely different from the next one. High Fiber is the third installment of NMWA biennial Women to Watch exhibition series, in which regional outreach committees of the museum meet with local curators to find artists. The NMWA made a final selection of the seven artists representing different states and countries.

Rachael Matthews was a leader in a revival of knitting movement in the UK about 10 years ago.  She is co-owner of a knit shop in London, Prick Your Finger, where one is more likely to see objects crafted of yarn, rather than a sweater. In Knitted Seascape, 2004, Matthews used illusionism much the way painters do; her hanging curtains, lace-like and pleated, open onto the seascape seen through a false window.  She created depth similar to that in Raphael’s visionary painting. The vigorous texture into those waves, making their foam as real as in a Winslow Homer seascape, is not painted but knitted.  Matthews also did a floor sculpture to which an hourglass and skull and crossbones attach.  We are reminded of death in A Meeting Place for a Sacrifice to the Ultimate Plan, 2010.  Another piece she supplied in the exhibition is a wedding dress, made as a collaborative effort where the individual pieces knit by different women form the whole.   Collaboration and connection is certainly a part of emerging trend in Fiber Art. 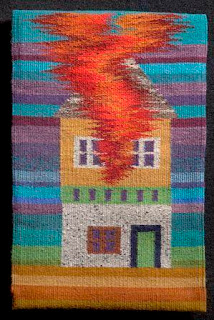 Louise Halsey, from the Arkansas council, is a weaver, who has spent years studying the ancient art of weaving, while teaching and doing workshops.   Her work demonstrates vivid color and technical perfection, but also shares the artist’s own narrative ideas.  The four works in this show are images of homes. On her website, she explains, “Recently I have been weaving tapestries using the house as a symbol for what I cherish. These images of houses include placing the house amidst what I see as threats that are present in the environment.”  Dream Facade, at right, may warn of being too strongly possessed and owned by vanity, while Supersize My House, 2011, questions the dream of bigger and bigger homes. 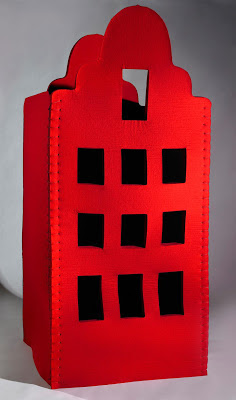 The house becomes sculpture in large, colorful constructions by Laure Tixier, from France and representing Les amis du NMWA, are based on architecture from around the world.  Like children’s forts out of blankets, architecture meets the basic need for shelter with imagination in design.  She stitches the forms out of felt and very large Plaid House reflects the classical architecture of Amsterdam.  Smaller houses are also on display and they reveal her domestic interpretations of diverse types of architecture, including that of the future.  Tixier clearly has an interest in the symbolism and meaning of architecture in history. 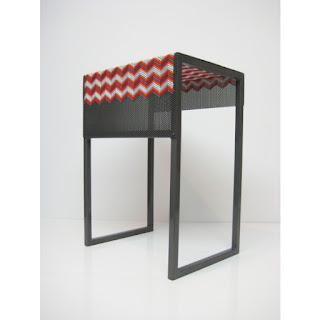 Debra Folz of Boston combines sophisticated cross-stitch patterns on furniture and mirrors with a sleek modern look. Her works are a contrast to the homespun beauty of some of the works described above, but she was trained in Interior Design.  The threads are small and look mechanical but can have depth, control, color harmony and pattern.  Mixing thread with a industrial materials may sound discordant, but this harmony of opposites is beauty!

Homes and their contents give security and comfort, but not all works of art in the exhibition have a domestic meaning.  There are sculptural wall hangings and installations in the NMWA’s show.  Beili Liu, recommended by the Texas State committee, spun strips of silk, a material traditionally associated with China, her country of origin.  For Toil, she burned the edges of silk fabric with incense before winding the strips into the funnel-shaped projections that point off the wall.  These forms twist and turn in various directions — like miniature tornadoes — creating paths and shadows on the wall.  A variety of beige and brown tones add to the richness of this view.  Liu’s larger Lure Series (not on view) installations use thread to recall Chinese folklore, she has that is said her work highlights the tensions between her Eastern origins and Western influences. She bridges these gaps well.  In fact, fiber art is all about connecting.

Fiber Art seems to be on the verge of asserting new importance into the world of art.  Jennifer Lindsay, one of my former students from the Smithsonian Associates and Corcoran College of Art and Design’s Masters Program in the History of Decorative Arts, coordinated the public outreach, the design and collaborative installation of the Smithsonian Community Reef.  The replica of a coral reef in crochet made expressly for the Smithsonian National Museum of Natural History’s 2010-2011
expressly for the Smithsonian National Museum of Natural History’s  2010-2011 Hyperbolic Crochet Coral Reef project, is now on view in the Putman Museum of History and Natural Science in Davenport, Iowa, until 2016.

Jennifer also dyes her own wool yarns and uses them to make intricate knitted and crocheted clothing, examples of which are shown here.  She calls her cowgirl jacket a memento mori for  Frida Kahlo.  It uses nearly every knitting stitch available.    Note the skeletons which link this design to El Dia de los Muertos.   Memento mori is a reminder of death.

Getting back to the women’s museum, in the permanent collection, there are other works of fiber or those that remind us of fiber.  On the 3rd floor of the NMWA, Remedios Varo’s Weaving of Space and Time is on loan along with two other works by Varo.  The oil on masonite painting uses a symbolic  circle to magically pull together the opposites of male and female figures, representing time and space.  Within the circle are threads, not real threads but painted threads in light glazes that weave together ideas.  Nearby is also a Judy Chicago painting whose circular painted form in acrylic and airbrush resembles the type of patterning with which traditional fiber artist created.

NMWA also has a piece by Magdalena Abakanowicz, one of the best known fiber artists of today.  Four Seated Figures are of her recognizable life-size figural types made of fabric.  The same, yet different, these abakans are representative the anonymity and uniformity of communist society in Poland, what she has known during the bulk of her life.  Born in 1929, to Abakanowicz is accustomed to living in conditions which repressed individual creativity and intellect in favor of the collective interest.

Finally, we can be reminded of the diverse women came together for their quilt-making art who in a film of 1995 called How to Make An American Quilt, including Maya Angelou, Anne Bancroft, Ellen Burstyn, Alfre Woodard and Winona Ryder. Quilting is one the most lasting forms of Fiber Art, embedded into so many folk art traditions.  In the end, the making of a quilt is compared to life:  “As Anna says about making a quilt, you have to choose your combination carefully.  The right choices will enhance your quilt.  The wrong choices will dull the colors, hide their original beauty.  There are no rules you can follow.  You have to go by your instinct.  And you have to be brave.”