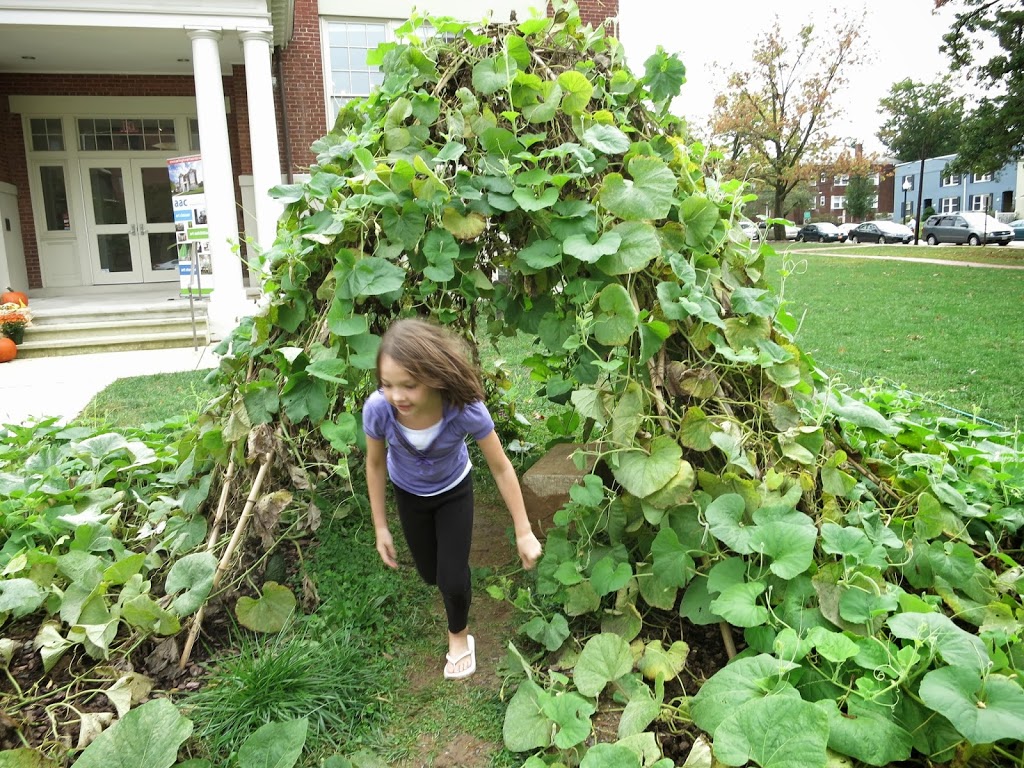 Which foods are healthiest—animal fats, grains or vegetables?  Will sustainable farming feed the world or are GMOs the answer for stretching our crops far and wide?

Americans don’t agree about food, just as they can’t reach consensus in politics. So we look to some extraordinary artists who can fill the void, farmers who are also artists.  They use their creative gifts to solve problems and sustain us.  Museums on the National Mall are closed at the moment, but the Arlington Arts Center and the Katzen Arts Center at American University have been hosting two parts of an exhibition, Green Acres: Artists Farming Fields, Greenhouses and Abandoned Lots.  The shows features works by farmer-artists who have developed novel farming practices to inspire self-reliance, improve food quality, serve the community while demonstrating sustainable techniques that can teach and inspire.


Potomac Vegetable Farms in Purcellville and Vienna, Va., uses sustainable techniques, makes its own highly regarded compost for fertilizer and avoids all forms of chemical interventions. PVF was one of thirteen local farms featured in Permaganic Co’s Soil Olympics demonstration at the Arlington venue of Green Acres.  Michael Bradford is one of the farm’s own artists, though he is not in the exhibition.

From a movement that began over 40 years ago, independent Curator Sue Spaid has pulled together the legacy of these artists and presented some current projects, too.  After many years in the planning, the first exhibition was held last year at the Cincinnati Contemporary Arts Center, before going to the Arlington Arts Center and the Katzen Arts Center.  The Emily Hall Tremaine Foundation Exhibition Award program which supports thematic exhibitions that challenge audiences and expand the boundaries of contemporary art, provided funding for the exhibitions.  Many of the original artists, such as Permaganic Co, came from the Cincinnati area, but agricultural participants from the Washington-Baltimore-Philadelphia corridor have been involved, too.

Joel Salatin, a farmer in the Shenandoah Valley, wrote one of six guest essays in an excellent exhibition catalogue.  He advocates for local foods and Polyface Farm’s non-chemical, sustainable and humane techniques, earning the title “high priest of the pasture.”  In Manifesto 2050, Salatin asserts that our industrialized food chain, with its price supports, monocultures, the food police, extensive processing and GMOs, has assaulted our health and made Americans profoundly ignorant about food and farming.  “We’re populating our future with young people profoundly disconnected from their ecological umbilical cord,” Salatin exclaims.

Another essay is by artist Agnes Denes, who in 1982 planted 2 acres of wheat in lower Manhattan. The land was at the foot of the World Trade center and two blocks from Wall Street.  Her act, with the help of two assistants, called attention to our values, our mis-management and waste of resources.  The peaceful paradise was in contrast to the world of competitiveness, money, congestion.  After the harvest, the land was replaced by a big development, but many office workers were sad to see it go .


Two artists, Doug Retzler of Baltimore  and Susan Leibovitz Steinman of California, built edible landscapes with community volunteers.  On the grounds of the Arlington Arts Center, the works allowed visitors to observe the growth and change, and to help themselves to the food from these edible landscapes. Children enjoyed running in and out and all around Retzler’s Gourd House Spirit Palace.  Steinman, an advocate for community, portable and raised-bed farms, wrote another essay in the catalogue.  Newton and Helen Harrison of Harrison Studio also wrote an essay which is a poem.


Films, drawings, photographs and installations demonstrate the farm artists’ techniques.   A piece I found fascinating was Mei-ling Hom’s  straw beehive, something artist Doug Retzler described to me as “a Mycenaean beehive,” referring to its shape. However, it’s actually a sculpture which has been inoculated with mushroom spawn and is titled Mushroom Cap – A Mycorestoration Module.  Resting on a tabletop and lying dormant now, all it needs is water and mushrooms will grow.

In addition to the plants, there was Don Devine’s Sheep Farm and the wool which comes from it.   Shannon Young’s outdoor installations incorporated shopping carts as transportable gardens. Exhibits at the Arlington Arts Center were dedicated to two main topics: Biodiversity and Innovative Farming Strategies.

Community Awareness, Farming Communities/Community Farming and Farming Mysticism are the three broad categories on exhibit at American University.  On the wall, it announces that “the best urban defense is urban permaculture.”  A picture of Urban Defense in the Schuylkill Environmental Education Center, Philadelphia, shows that the entry to a urban farmsite mimics Federalist architecture in historical Philly.

Homemeadow Song splits the installation, Bundle of Sticks (Chicken Coop) into two parts.  The farm artists are Vicki Mansoor and Peter Huttinger. Their biodynamic agriculture techniques, influenced by Rudolf Steiner, are related to remediation and renewal of the orchard at Homemeadow Song.  In constructing a bioswale to manage and sequester rainwater, they’ve improved the habitat for red currants, native plants and bee forage.  An urban homestead is a living organism, a complicated system of interdependent organs in motion within the cycles of seasons, an exhibit label reads.

The exhibition continues one more week in the architecturally beautiful space of Katzen Arts Center at American University.  Everyone who can go is encouraged to see the ideas presented there, Tuesday-Sunday, 11- 4.  If you can’t go, the catalogue, Green Acres by Sue Spaid, is full of inspiration, thoughts and ideas:
“As urban farming works
Where we as artists
Taught ourselves and anyone else
Who was willing to learn
How to feed ourselves….”  excerpt from Newton and Helen Harrison’s poem
I’m hopeful that through agriculture and the local foods movement,  a great divide, the misunderstanding between the urban and rural parts of the US, can be bridged.