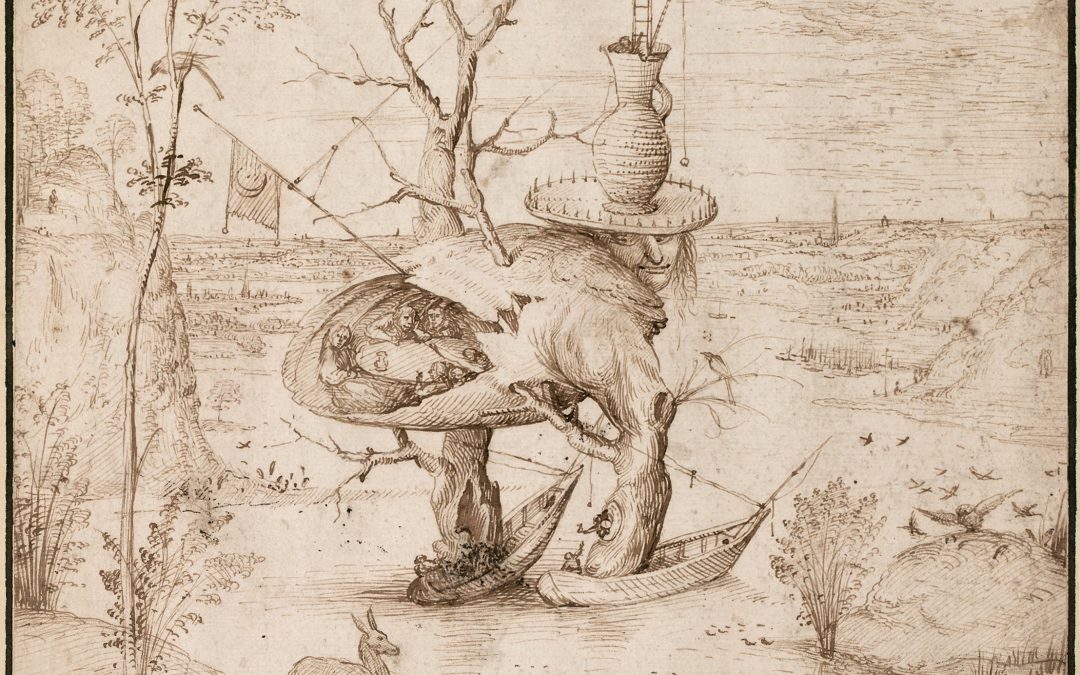 Drawings by Bosch: Realism and Fantasy

My last post of 2017 shows why ART is a better form of escapism than Star Wars.  Bosch’s Tree Man has body of a crab held up by tree trunk legs riding in boats.  The world is not as it expected.  The many who made this fantasy portrait more than 500 years ago still gets more viewers than nearly any other other artist of any time period. Why?  Because he is so much fun.

Two exhibitions last year celebrated the 500th anniversary of Heironymus Bosch’s death.  One million people were expected to visit two different exhibits, first in the Netherlands, then in Spain. The Prado exhibition was so popular that the museum extended it an extra two weeks and kept the doors open until 10 p.m. The other exhibition had been held earlier that year in Bosch’s birthplace, s-Hergotenbosch.

Currently, The National Gallery of Art in Washington has a show of “Dutch Drawings from Bosch to Bloemaert.”  They come from the Museum Boijmans Van Beunigen in Rotterdam.  There are superb drawings by Pieter Bruegel, followers of Jan Van Eyck and Rogier van der Weyden, Lucas van Leyden and lesser known artists such as Roelant Savery. An examination of the two drawings by Bosch shows how well he was attune to the realism in nature. The Owl’s Nest puts Bosch close to the same category as Leonardo and Albrecht Durer, when to his keen understanding and observation of nature.

Bosch repeated most of the Tree Man, top, in his most famous painting, The Garden of Earthly Delights. The metamorphosing figure is generally considered to be a self-portrait.  The Owl’s Nest is not an idea or a study for any of Bosch’s surviving paintings.  The faces, wings and nest are realistic. There’s a lightness and delicacy that goes with Bosch’s style, without falling into his usual diversion — fantasy.  Strokes are very precise of various sizes and lengths.

The Owl’s Nest was probably always planned to be a finished drawing. Bosch painted owls in nearly all his paintings.  According to dailyartdaily, “There’s a lot of speculation about what his owls mean, and how they should be read.”  Multiple and contradictory meanings are associated with owls. Sometimes they might signify wisdom.  “But it seems around 1500, the owls were generally associated with menace and death and had an emblematic, moralistic significance.”

The other drawing by Bosch from the Boijmans Van Beuningen has two scenes.  The scene that is Fox and Rooster.   Presumably, the Fox is ready to pounce upon the rooster, but you really need a magnifying glass to see it.  Once again, it’s a dark side of nature, with something ominous as in The Owl’s Nest.  However, the Fox and Rooster have a rich folklore tradition, as part of Aesop’s Fables, and in Chaucer’s Canterbury Tales.   Of the two drawings on the same piece of paper, this one is considered to be of a later date.  It is tentative and sketchy compared to The Owl’s Nest and Tree Man, drawings meant to appear finished.

A picture on the drawing on the other side of the paper, also a pen and ink, is believed to be the very first drawing by Bosch.  Two Women, has an elderly woman on the right and a woman holding a spindle on the left.   These figures variously interpreted as old women, or witches.  They could relate to Netherlandish proverbs or folktales. Was there some significance attached to the spinning, as if spinning some devious fate?

Although one drawing is early from his career, and one from a later period, both have the type of reference to proverbs and/or folk life we come to expect with Bosch.  When I say Bosch’s figures are frail, I mean it in two ways. They convey human weakness (or foolishness), and they lack the monumentality and weight that contemporary Italian artists gave their figures.  One might argue that Italians were humanists, while the Dutch painters were still medieval in outlook.  Even the Italian that is superficially most like Bosch, Piero di Cosimo, portrays monsters who are satyrs who seem to be descended from antiquity.

Grotesque walking head and small toad monster, a drawing from the Prado exhibition that is permanently in Berlin, presents what we expect from Bosch and why he fascinates. As one website says, “He externalizes the ugliness within, so that his misshapen demons have an effect beyond curiosity.  We feel a kinship with them.”  This is the essence of the Bosch fascination.

Bosch’s dates (c.1450-1516) are roughly the same as Leonardo da Vinci’s, who was born in 1452 and died in 1519.  Da Vinci paintings have science, nature, perfection and a noble humanity while Bosch, painted a fantastical mixture of a frail humanity, along with demons and monsters.  However, closer examinations shows that Bosch an equally gifted draftsman and a keen observer of both the nature world and human nature.

While Leonardo also saw the greatest meaning in the extremes of beauty and ugliness in humans, we always remember him by the portrayal of perfection.  He himself seems to gaze down on us humans as an all-knowing power.  But if we think about it, so did Hieronymus Bosch.  One of his drawings (not in the drawings exhibit) give us much insight into his way of thinking. It’s an ominous finished drawing called The wood has ears, the field eyes.  Many eyes lie in a field and two ears are listening by the trees.There’s the owl, again, right in the center.  It makes me wonder, is the world really as it always seems?  Or is he just reminding us that God is always watching?  We could imagine Salvador Dali or Rene Magritte interpreting a landscape this way, perhaps without the owl.

Bosch reveals hidden truths from a mind much deeper than our own. He’s just as wise as Leonardo, and he’s looking forward to the Surrealist artists of the 20th century.

The best artists of any time period speak to future generations nearly as well as they reflect the collective mindset of their time and place.  So Bosch continues to be so popular today.