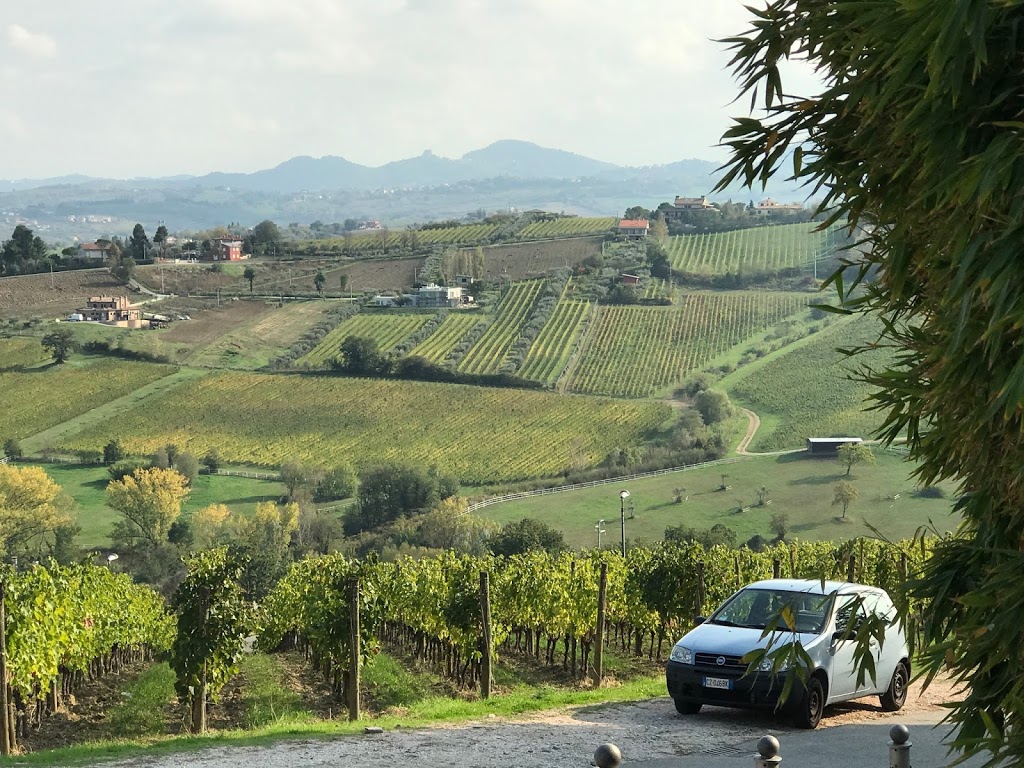 The Rehabilitation Community of San Patrignano

I recently had the pleasure of experiencing a drug rehabilitation community in Italy, a very special place called San Patrignano.  Founded in 1978, it’s a few miles off the eastern coast of Italy, near Rimini, in the Romagna region.  The tiny country of San Marino can be seen in the distance.  And while it may seem strange that I’d write about this on an art blog, there are reasons I feel drug prevention connects to the world of art.

San Patrignano is also committed to drug prevention.  Specifically I was there to participate on a panel for parents, policymakers during the “WeFree” days, on “Educate by leaving a positive sign.” The program brought about 3,000 teens from Emilia-Romagna and throughout Italy on October 10-11. The teens had two days of activities which concentrated on teaching joyful experiences without the need for drugs.  There’s art, music and dance.

Groups from other countries were invited to share their programs too.   Throughout the year approximately 50,000 students, roughly ages 13-18, will actually come visit the community and participate in programs.  San Patrignano is well-known throughout the world and has many foreign residents, including Americans.

There’s much we can learn about drug rehabilitation from San Patrignano.  Those who come here have lost a lot of hope, have been through other programs and failed.  A small percentage, perhaps 10%, is referred by the courts.  They commit to coming for at least three years, which sounds horrible to most people.  The residents’ recovery rate is around 72% which is very high for a rehab center and remarkable considering how large it is.

Going to rehab at San Patrignano is not a life sentence, but, rather, a life-affirming experience.  There are 1300 people living in San Patrignano, at least 1000 of them men.  Cocaine is the most common drug of addiction amongst the residents. (I was told drug use was generally not so common among females in Italy, but that is changing.  Also, the average age used to be older, in the 30s, but now the average age for a resident is around 26.) At least 100 Americans have been through the program, and there are Americans and Canadians there now.  For Americans, however, it is not easy to get the Visa that allows them to get into the program.

Although I never saw small children, there is a pre-school.  I was told that mothers who are in drug treatment have their children living with them and the center provides them with a school.  Such a program is so much more enlightened than ones that separate small children from their moms, as American prisons do.  (They punish the children, as well as the mothers.) I asked if romance was possible in the community. It’s not so easy.  People come there to work on their own recovery, not by coupling. If there is a couple interested in romance, they will not be allowed to see each other for a waiting period.  After time passes and they still have the desire, they may develop a relationship.

Amazingly, no one pays for their treatment and the Italian government does not contribute either.  Private donations provide about 50% of the cost, while the community raises the rest of the money to sustain itself.  Everyone who lives at San Patrignano has the opportunity to learn a trade, so that he or she may enter back into society in a positive way.  Some are involved in agriculture,  the grapes and the olive trees, of course.  There’s also a cheesemaking center, farm animals and a well-regarded bakery.

The chef’s school is a very popular training for future chefs of Italy.  Others learn woodworking, leather working, wallpaper design, printing. San Patrignano sells its baked goods and furniture, but it also fulfills contracts for name brand leather designers.  If you buy a beautiful, designer bag made it Italy, it’s possible that the craftspeople of San Patrignano made it.  The furniture makers showed me their catalogue.  They carve designs from old oak wine barrels no longer in use.   The results are very interesting and creative.

I spent a good deal of time with the medical director who was at one time a resident of San Patrignano, in his 20s.  A sensitive and intelligent man, I was surprised to find out he had been a

heroin addict in his 20s.  He went to medical school later, which speaks well for how San Patrignano inspires and prepares its residents.  In fact, many of the staff members were former rehab residents, and they believe very strongly in what the community does for people.

Antonio Boschini, the doctor, specialized in infectious diseases, because he got out of school at the time of the AIDs crisis.  A few residents with AIDs remain, but it is not a major need.  Medical emphasis is on therapy and counseling more than on giving drugs to get the patients off of drugs.

I learned about Vincenzo Muccioli, the infamous founder of the community.  A wealthy man who owned a hotel in Rimini, he was concerned about the large number of homeless people addicted to drugs in the late 1970s.  He had a second home in the mountains and invited these homeless to live there as long as they agreed to work. He was determined to help them and give their lives meaning.  Well that was the beginning of San Patrignano, and now it’s an exemplary model of the international community.

The dining hall is huge and I can’t tell you how pleased that the day I ate lunch there they served my favorite Italian dish, Saltimbocca alla Romana, and some pasta of course.  There’s a real sense of family, community, peace.   The closest analogy I could think of was the monastic communities of the Middle Ages which the sense of fellowship.

The staff gave me some of their materials with the 3x the letter R, standing for Rehabilitation for Recovery and Reinsertion. The three booklets included are a handbook on justice interventions in place of incarceration, a manual on rehabilitation and recovery and a handbook on social integration of recovered drug users.    It is a program that should be imitated, but can anyone else do it so well?