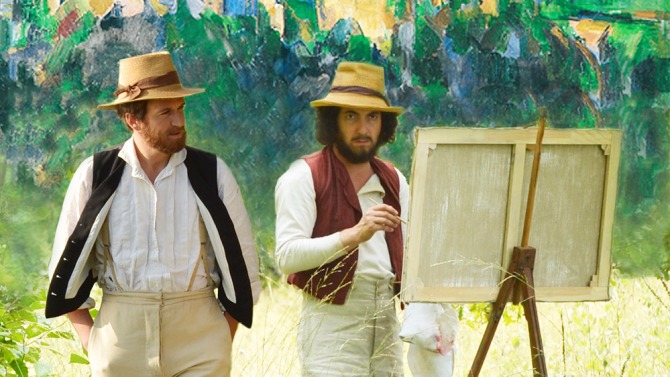 The Friendship of Paul Cézanne and Émile Zola

The French film, “Cézanne and I” or “Cézanne et Moi,” will be of most interest to those who know the story of Cézanne’s lifelong friendship with Émile Zola. Guillaume Gallienne, an actor with the Comédie Francaise gives an outstanding performance as Cezanne, zeroing in on his character.  The actor who plays Émile Zola, Guillaume Canet, is also quite believable. The film direction tells the story extremely well. In addition, the production team captures the colors and aesthetics well enough to make the viewer feel he or she is there.

The film, “Cézanne and I” explores Cézanne’s character through the friendship with Zola and his relationship with others–wife, mother, father, and how it relates it to his art. Director Daniele Thompson picks up on the many mysteries of these relationships, the personality of the man, and his inner character.  Most of the film portrays Zola as a less complicated character than Cezanne, easier to understand as a person.  Many people will want to see it to experience the landscape of Aix, which is beautiful. Criticism of the film comes from those who don’t understand the dialogue, but again it helps to have some knowledge of the history of the friendship.

The most influential 20th-century artist, Picasso, said he owed everything to Cézanne.  Matisse claimed “he’s kind of a god of painting.”  Recognition and acceptance were elusive for Cezanne during most of his career.  As for Émile Zola, many French of today still claim him as their favorite novelist. So to think that these two giants of late 19th-century French culture were classmates and best of friends growing up is amazing.  It’s also a tribute to the school in Aix-en-Provence which nurtured two extraordinary geniuses.

Fortunately, the movie takes you through some of the beautiful scenery they roamed through in childhood, such as the trails around the Bibémus Quarry and Mont Saint-Victoire.  There’s a glimpse at the richness of color which he portrayed so well in his paintings, with that perfect balance of warm and cool colors.  The movie didn’t show the beautiful house he eventually inherited from his parents.

Cézanne was the very first artist who really interested me–probably because of his colors.  In high school, I was given the assignment to choose an artist to study and try to paint in his style. I chose Cézanne and it was difficult.  In grad school, I was required to read Émile Zola’s novels, Nana and The Masterpiece.  The Masterpiece is about an obsessive and determined artist who ended up being a complete loser.  When it was published in 1886, Cézanne interpreted it to be entirely about himself. The descriptions of their childhood wanderings together were true to life. I don’t remember the book so well, but I thought more Degas than Cezanne while reading it. Zola was already a rip-roaring success as a novelist by the time he wrote it, and very prolific. The Masterpiece must have seemed like a slap in the face to Cezanne who was just as talented and worked as hard. Cézanne was 47 years old, but, as an artist, he only knew rejection at that time.  His recognition did not come until 10 years later — when in his late 50s.

My understanding was that Cézanne was so offended by the portrayal (parts of it are read in the film) that he would never speak to Zola again. In the movie, they are in contact again.  From the film, I actually sympathize a great deal with both Cézanne and Zola.  Zola claimed that Lantier, the artist in the novel, was a composite of artists he had known. It doesn’t help that he describes their childhood friendship pretty much as it was.  In Zola’s novel, Lantier ends up killing himself, which certainly must have suggested to Cezanne the worthlessness of his artistic endeavors. However, the ending is consistent with Zola’s style of naturalism which exposes the brutalities of life.  As far as I know, none of the painters Zola knew actually took their own lives.  In reality, Cezanne was rarely satisfied with his own painting, even after he received some recognition.

The time period was great for artists and writers mutually supporting each other, hanging out the cafes together, a tradition that continued through the 1920s. Both Zola and Cézanne went to cafes and on social excursions with Manet and the Impressionists. However, Cézanne was frequently opinionated and offensive and, at the same time, more withdrawn than the others.  After a few years, Cézanne retreated back to his native Provence while Zola stayed in Paris.

The move flashes between childhood, early adulthood and various events in their lives.  There is a third friend named Baptistin who became an engineer, but also was a part of their threesome. Zola’s father died when he was young and his mother struggled to support him. Cézanne was rich; his banker father wasn’t initially supportive of his chosen profession. As an adult, he was consciously rebelling against his father whom he considered a social climber. As might be expected, Zola became bourgeois and played the part of worldly success quite well. Cézanne rejected many of the social graces, and was considered uncouth and boorish by some. Certainly, many great artists also fit the stereotype of being complete slobs, such as “big, grubby Tom” Masaccio and the great Michelangelo.

Cézanne was temperamental, as artists often are.  It comes with the territory of obsessiveness. He frequently tore up his paintings. It’s the frustration that is expressed by Lantier, the artist in Zola’s novel. He stuck to his goals until the very end, but was never satisfied with his painting.  He died at age 67.

Cézanne got along well with Camille Pissarro, the oldest of the Impressionists and somewhat of a mentor for all artists in the group. They had a strong rapport and mutual respect. Cézanne and Édouard Manet (my other favorite artist from the period) did not like each other.  This lack of compatibility is curious to me because some of their artistic goals (the way they see form and structure) appear somewhat similar. Each is important for redefining the structure of painting through innovative means of composition that rejected traditional foreground, middleground and background. Both artists were from well-to-do backgrounds, but the elegant Manet, is known to have thought of Cézanne as ill-mannered and coarse.  Both artists received much public derision and criticism, but the younger artists of the avant-garde loved Manet.

The movie even puts Cézanne next to the gorgeous Berthe Morisot, known for her refinement and close relationship to Manet. My personal impression is that Cézanne suffered from jealousy of Manet on many levels, especially since Manet was so admired by his fellow artists.  His good friend Zola had written a well-known and important article in defense of Manet.  Zola also defended Cézanne and the other artists who were Impressionists through his essays. However, Zola’s novel, The Masterpiece expressed less respect for their style than one might expect.

Cézanne’s portraits of his wife have always amazed me for their detachment and lack of feeling. Was he at all in love with her? According to the movie, he loved her because she could sit hours without moving.  None of his portraits of her show love or any feeling at all, and Thompson explores why.  The filmmaker also suggests that Cezanne and Zola’s wife had at one time been involved — before she married his friend.  I’m not sure if that’s the truth or just the filmmaker’s conjecture.

Most of Cezanne’s portraits are all about the structure and composition of the painting.  The love in Cézanne is found mostly in his portrayal of nature particularly in portraits of the mountain he idolized, Mont Saint-Victoire.

There is feeling in the self-portraits — the feeling of intensity and determination in his eyes.  I think his self-portraits are excellent because they capture the strong shapes with contrasts of color.  From these we can trace the formal properties that lead to the Cubist style of Picasso and Braque.

Quality films about artists help us to understand how an artist’s mind works.  This film helps us understand the artist more through his relationships rather than through the art itself. (I personally have a hard time teaching Cézanne.) The theme of denying his feelings and not showing that he cared for others comes up again and again. It’s a selfishness that is in pursuit of art, and/or, ego. Yet, if had been only about ego, Cézanne would have given up years earlier.  He is an artist who died painting.

In 2011, I went to his home in Aix-en-Provence, his studio and Bibemus Quarry where he did so many paintings. I will never forget the excellent tour guide at Bibemus Quarry, a landmark that inspired Cézanne so much.  The colors of those rocks really are the rich yellow ochres and reds that we see in Cézanne’s paintings.  The quarry had been used for buildings since Roman times, but the rocks had become too salty and sandy and it was abandoned in the 1800s.  You can really understand how the quarry’s strong, virile presence inspired Cezanne. I realized that Mont Saint-Victoire and Bibémus Quarry are much further away from each other than in the impression from Cézanne’s painting in Baltimore, shown above.

Photographer Phil Haber’s blog of Cezanne really captures the beauty of his scenery today.  However, Phil had to put together a composite of two photos to get the view seen in the Baltimore painting. Cézanne’s compositions are reality, but reality from a rearranged view.

How does this fit into the history of art and literature?  Zola’s writing is naturalism and he is important for describing things and the social classes with a gritty truth of lower-class life.  Impressionists were more inclined to overlook the brutal side of life. Renoir painted the working class of Montmartre, but he idealized them–turning them into angelic figures. Degas painted ballet dancers and laundresses, stressing the vigor of their work.  Zola has more in common with Courbet, Degas and early Manet.