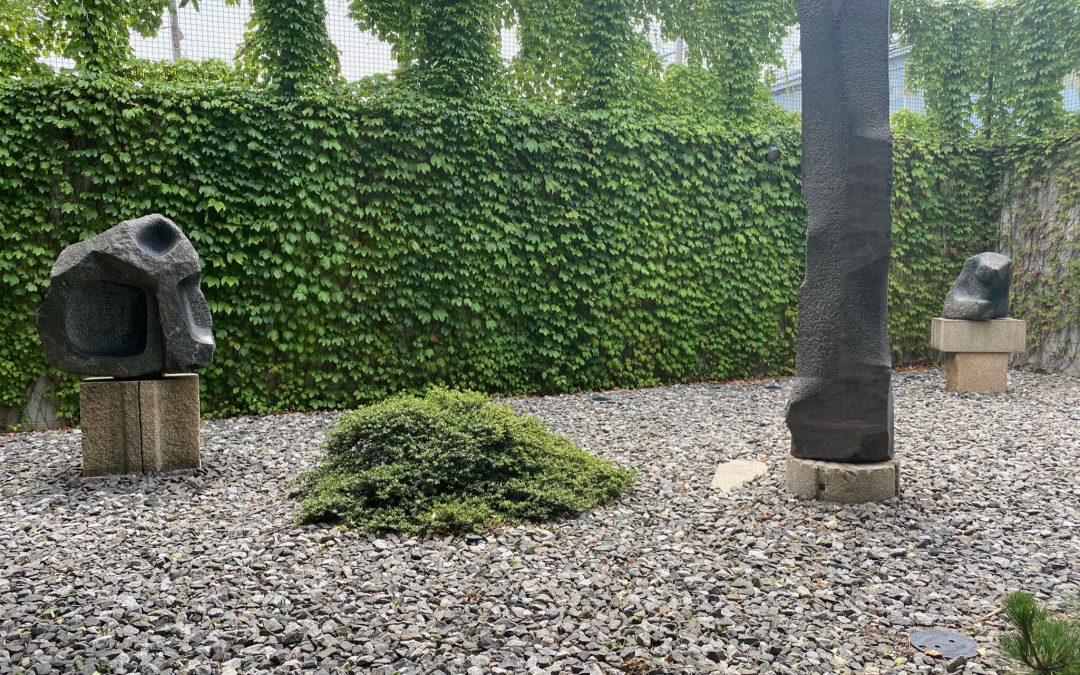 Looking for Peace? Go to the Noguchi Museum

In 1985, sculptor and landscape architect Isamu Noguchi opened a museum of his work in an industrial building in Long Island City, New York.   It’s a place to go for a zen experience, especially after all the stressors that continue to rip our world apart. Reservations are limited, but if you can buy the $10 ticket ahead of time, it’s only a short trip from Manhattan, close to LaGuardia Airport.

In art, I look for a way to make sense out of life, to find beauty or joy, and hopefully find a place of rest. Noguchi does the latter for me, which is especially needed during difficult times.  Though Noguchi used art to protest nuclear war and destruction, his work brings us to a place where we put rhetoric to rest, unlike activist artists of today who scream with anger and miss the mark of meaningful communication.

Noguchi is first and foremost a landscape architect, but also a furniture designer and sculptor. It’s not surprising that he studied with Brancusi.  They were similar souls. A current exhibition at the museum is called Useless Architecture. But what is “useless architecture” is “useful sculpture.”

Many of his sculptures are upright, rough and irregular. They remind me of the monumental stones of ancient Britain and Europe, called menhirs. Like the menhirs, they’re raw assertions of strength with the overlay of a human imprint.

But other sculptures are like the dolmens, formed when the upright stones hold horizontal stones. According to Britannica, “Dolmens represented the first real attempt by the settlers to organize and shape the landscape around them.“ That’s how I experience another sculpture, End Piece.  It resembles a dolmen but combines many oppositions: wood and stone, rough and/or polished, linear or curved, straight or angled, vertical and horizontal. When you look at it, these contrasts reflect the oppositions that make up life, oppositions that need to be brought into harmony.

We absorb Noguchi and the meanings of his works through silence. They’re imperfect, but feel “right.” Though Noguchi’s sculpture is architectural, it is not architecture.

Noguchi’s body of work replicates how mankind fits into nature — but readjusts it for a comfortable fit. The best of artists are able to teach us how to see, both the inner and outer worlds, and to bridge our gaps of understanding. One sculpture of a steel-cut trapezoid with a suspended rock in the center says it all. The museum sent me the name of the piece, Costume for a Stone. The combination of natural and manmade materials, common to much of Noguchi’s work, works beautifully here.

Circles repeats a theme Noguchi sculpted over and over again.  He called one pink circle the Sun at Noon, Nearby is a black circle called Midnight.  Circles have no beginning or end; they’re the Alpha and the Omega, the symbol of God, a representation of perfection. Yet each contains many stones fit together to draw those perfect circles.

There’s another pink sculpture nearby that resembles a snake. Noguchi called it Magic Ring, I’m reminded that life is a journey, The journey is not predictable, but it can take you to places of magic.

I was curious about a piece called Sentinel.  Noguchi made the stainless steel sculpture specifically for an exhibition at the Pace Gallery in 1975.  Its name suggests that it is standing guard somewhere.  Again I like how it seems to fit all things in its proper place, horizontal, vertical and the circle.

He knows our place in the natural order of the things, which is one reason why he was so horrified with the prospect of atomic destruction, a subject that is on exhibition on the 2nd floor of the museum now. There’s a model for a monument to the victims of Hiroshima, a project that was never built.   It would have been a magnificent arch set off in a symmetric line, with the victims’ names underground. Most of Noguchi’s own life was split between the US and Japan,

His father was Japanese poet, his mother an American writer. He was born in Los Angeles, in 1904, but raised primarily in Japan. His spent his life between the two countries. Then when the US was at war with Japan, he voluntarily interred himself in Arizona. I have written previously of his sculpture in Smithsonian Collections.

Why should we go to this museum? — to make peace with the most impossible of situations. “Due to war, Noguchi also knew the pain of belonging to nations that were bitter enemies, and he produced artworks imbued with an earnest desire for peace,” according to the Noguchi Museum website.  He is an artist who truly moves me to another frame of mind.

As Friederich Nietzche said, ‘We have art in order to not die of the truth.”

Noguchi bought an old photogravure studio designed the building to accommodate his museum, across the street from his studio.

One of the things I appreciate most about living in Washington is the quality of its art exhibitions. A National Museum for Women in Arts (NMWA) exhibit,“Picturing Mary: Woman, Mother, Idea,” brings some of the best images from Italy in Washington.  This magnificent show dedicated to the mother of Jesus has a Botticelli, two Della Robbias, a Michelangelo and a Caravaggio.  It’s almost better to see it in Washington, DC, than in Italy, because so many of the most beautiful images are brought together in one place.  However, the exhibition is only going to be there one more week, until April 12.

The exhibition also has a significant number of early Italian sculptures, a stained glass window and even an image made in India.  Paintings and sculptures come from several museums in Florence, Rome, Milan and Paris. The National Gallery of Art in Washington has loaned several pieces to the exhibition, which stand up in quality with some of the best in Italy.  Furthermore, NMWA added paintings from its own collection.

The exhibition begins with the late Gothic period/early Renaissance. Above all, it captures one aspect of Mary that is most appreciated, her motherhood.  In  Andrea Pisano’s beautiful blue and white relief sculpture from the 14th century bell tower of Florence Cathedral (above), Mary is tickling the baby Jesus.  Italian artists at this time broke from the medieval and Byzantine artists by bringing Mary down to earth.  She is just like any other mother and Jesus is just your typical baby, no longer a miniature adult with an imperial demeanor.  They  have fun and are very playful.  He’s a true Italian bambino.

If anything to notice about this exhibition, it’s about love. There’s so much love.  Some images are incredibly sweet, such as a Madonna by the Master of the Winking Eyes (see bottom).  In this painting and others, Mary wears coral jewelry, a symbol of protection.  In an iconic Botticelli, Madonna of the Book, Mary shows the Baby Jesus a book as he looks up at her.  He holds three nails, foreshadowing His death, while her eyes hints of the sadness in knowing what will come.  Yet the sweetness and love in Botticelli’s imagery is heavenly.  Botticelli’s Mary is both a loving earthly Mother and an ideal of beauty that belongs in the perfect world of heaven.
A spectacular painting in the show is by Botticelli’s teacher, Fra Filippo Lippi.  In his image, Jesus pulls his mother’s veil and snuggles very closely.  Jesus stands on a ledge and Mary holds him in a niche behind.  Lippi’s Madonna and Child does what Renaissance art strove so much to do — bridge that gap between the earthly and heavenly.  He also creates an illusion of three-dimensional depth into space which reaches into our space so convincingly.

Fra Filippo Lippi was a priest by accident.  Orphaned as a child, he raised in a monastery, and raised to be a priest.  It wasn’t what he was meant to do. He fell in love with a nun, Lucretia Butti, and had a son who grew up to be the marvelous painter Filippino Lippi. The Pope gave Lippi a special dispensation to leave the priesthood and get married.  Lucretia and Filippino were probably the models for his Madonna and Child.

The Michelangelo in the exhibition is a well-known drawing from the Casa Buonarroti in Florence. Its beauty is amazing even though it’s an unfinished masterpiece.  Mary is nursing the Baby Jesus.  Michelangelo drew the baby Jesus with a great degree of light and shadow (chiaroscuro), to make him far more three-dimensional than the image of Mary.  I’m reminded that as an infant, Michelangelo was sent to live with a stone cutter whose wife became his wet nurse.  His own mother didn’t have enough milk to feed him.  It is said that living with the stone cutter for the first few years of life primed Michelangelo to become a sculptor.   His baby Jesus is very sculptural.

There’s an Artemisia Gentilleschi painting I had never seen previously.  She’s holding out her breast for Jesus, offering to nurse him.  She looks  down at Jesus very lovingly. He stops to think about it ,rather than jumping right to her breast. Artemisia Gentilleschi is the first female artist to have achieved an international reputation.  Her own biography. is very compelling.
One of the artists I had never heard of is Orsola Maddelena Caccia, a prolific painter who also was a nun in the 17th century.  There are six large paintings of hers in the exhibition, each with an elaborate iconography.   Her St. Luke Painting the Virgin reminds us that many of the stories surrounding Mary are purely imaginative.  Much of what is painted about Mary’s life is the result of popular legends.

This exhibition is significant and scholarly for a number of reasons.  It delves into the meaning behind the imagery.  It also reveals significant stories in Mary’s life and the lives of the artists who painted her.  The NMWA blog has much good information about the symbolism.  It also can teach viewers a great deal about the Renaissance and Baroque styles of art, particularly in Italy.

However, I appreciate the exhibition mostly for other reasons. When we look at these Madonnas and we see the maternal love, we know that Mary’s message is that she can be mother to all of us.  One doesn’t need to be Christian or even religious to understand that the love between a mother and her child is a universal truth.

The NMWA used images from its own collection to enhance the show,  pieces by Elisabetta Sirani and Sofonisba Anguissola.  The museum continues to make a significant contributions to the community, to promote women artists from around the world and to cultivate relationships with significant donors. Generous donors and supporters of NMWA underwrote the cost of insuring individual works of as they traveled from Europe.  The result of their gifts is that Washington has put on another exhibition of universal importance and appeal.

At the National Gallery, there’s another exhibition about the Italian Renaissance in Washington, Piero di Cosimo.  It taps into a completely different aspect of the Renaissance, the rebirth of interest in classical mythology.