Arcimboldo: Where Art and Science Meet “Vertumnus,” 1590, is a portrait of a Habsburg ruler, the
Holy Roman Emperor Rudolf II. Arcimboldo betrays a knowledge of plants from the New World: corn and pumpkins. This painting may suggest Rudolf II’s worldliness and the bounty of his reign.

In the tradition of Leonardo da Vinci and Albrecht Durer, 16th century painter Giuseppe Arcimboldo used his artistic skills to record his knowledge of the animals, plants, birds and fish, and he combined the seemingly opposite disciplines of art and science in a unexpected way. The National Gallery exhibition of his paintings is called Arcimboldo 1526-1593: Nature and Fantasy. The paintings on display are primarily portraits. But instead of recognizable faces with traditional features, he composed his portrait heads of painted vegetables, fruits, flowers, fire, fowl, fish and frogs. His human beings are a rich composite of the natural world.

Arcimboldo worked in Vienna as the court painter for the Holy Roman Emperor, first Maximilian II and then his son, Rudolf, II. When Rudolf II moved the capital to Prague, the artist followed. However, his life began in Milan, where Leonardo da Vinci had spent 17 years and had defined the artistic legacy of the region with its special interest in naturalism. Both Arcimboldo and his father made designs for the stained-glass windows of Milan Cathedral. Emperor Maximilian II was known for his interest in scientific studies, botanical gardens and zoological habitats with exotic creatures, and it is likely that Arcimboldo was already recognized for his drawings of the animal and plant worlds when the Emperor summoned him to Vienna in 1562.

Shortly after arriving in Vienna, Arcimboldo did a series of the Four seasons. ” Spring,” right, contains some 80 variety of flowering plants. Fruits and vegetables make up the bounty of “Summer,” below.

In 1563, Arcimboldo made his first set of paintings: four profile portrait heads to personify the Four Seasons. Spring is the most beautiful, comprised of eighty varieties of flowering plants to form a man’s head and shoulders.

file of fruits and vegetables facing the opposite direction. There’s a cucumber nose, teeth made of peas, a big apple cheek (or peach?), an ear of corn and a cloak woven of wheat.

It’s interesting to compare these depictions of the seasons next to Pieter Bruegel’s paintings of the months, a series of perhaps six landscapes (only 5 exist) painted in 1565, around nearly the same time. Bruegel’s The Harvesters depicts a late summer landscape of men and women working and living in nature. Bruegel’s peasants are in harmony with nature, but Arcimboldo’s man has become nature.

One of my favorite paintings in the Metropolitan Museum, New York, is Pieter Bruegel’s “The Harvesters,” a late summer scene that is part of a series, also. It dates two years later than Arcimboldo’s Four Seasons.Shortly after Arcimboldo painted the Four Seasons, he painted a group of the Four Elements. Earth, Air, Fire and Water contain creatures found in the sources from which all matter was believed to have originated. Although Air has not survived, it was made entirely of birds and prominently featured the peacock and eagle, symbols of the Habsburgs. Fire‘s hair is aflame, his lips made of matches and his tongue is the light of an oil lamp. Earth and Water are the most complex, formed out of myriads of creatures. The species were portrayed accurately, although the artist distorted sizes to fit into facial features. These men, personifications of earth and water, are hideously ugly! (See the picture of Water in part II)

The National Gallery of Art in Washington has acquired a fascinating portrait, “The Four Seasons in One Head,” now on view with the Arcimboldo exhibition.

The artist painted this composite of the seasons in 1590, while still in service to the emperor but after he had returned to Milan. He chose a naked, gnarled tree stump of winter for the man’s head, but draped it in spring flowers for a necklace. Further up the head are branches holding summer wheat, then several branches that translate into horns. Cherries hang over the left ear, while apples and autumn grapes poke through the branches for his headdress. Curiously, this ugly creature smirks at us with crooked eyes in a 3/4 view.

A closer look at this allegorical head shows that Arcimboldo peeled away the bark of one branch growing out of the head and signed his name on the exposed wood, perhaps indicating it is a self-portrait. The artist gave this painting to a friend. Experts have suggested that the painting reflects the subject in his state of decay; Arcimboldo was in the late season of his life at this time. He died three years after completing this portrait. Certainly it took a fine sense of humor to see mankind the way Arcimboldo did.

What are we to think of him describing human nature in such unflattering terms? It is a far cry from the idealized portraits of Raphael (see The Veiled Woman, Parts I & II, January 2010 of this blog). Leonardo da Vinci painted the Mona Lisa and other beautiful, benignant figures. Surprisingly, he also did drawings of extremely ugly men and women, with disfigured or exaggerated features too large or too small. A few of these tiny drawings are on view in the same exhibition.

The sea creatures used to describe “Water,” part of the Four Elements series, are accurate and have been identified in the display at the National Gallery.

Alcimboldo was familiar with Leonardo’s grotesque portraits and chose to make his portraits in that vein rather than in the beautiful manner of the High Renaissance. High Renaissance artists had used outward beauty to symbolize inner virtue.

If the earlier artists saw truth in perfection, Arcimboldo suggests he saw truth in something quite opposite. In his men (and sometimes women), exquisitely painted images of fish, fruit, lizards or frogs make up the small details of their faces. These creatures are part of us and we are made of them. We’re an ugly conglomerate. Arcimboldo exposes our human nature, a nature made no better than the natural world. Is our own ugliness his truth? 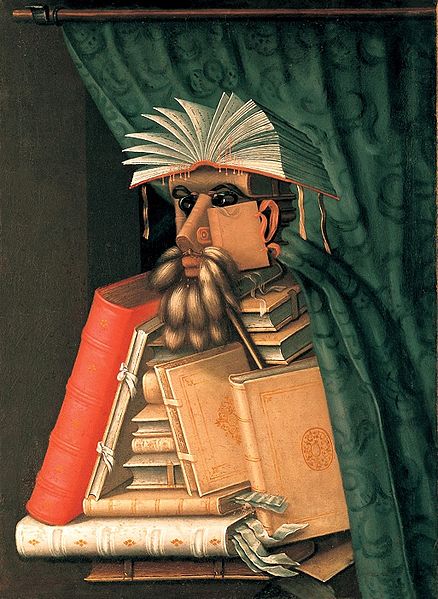