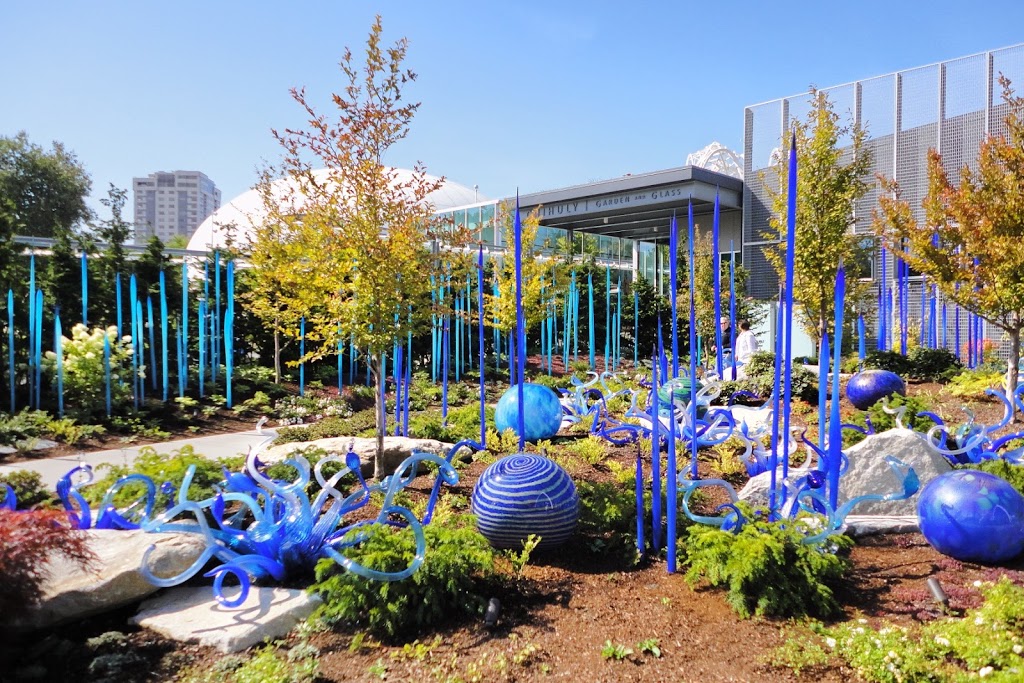 The art of glass is a place where artistic vision, exquisite craftsmanship and landscape design come together.  Currently, there’s an exhibition of Chihuly Glass at the Virginia Museum of Fine Arts, Richmond, which may be a distance to go see, but worth it!  It’s the third major installation in a US Museum, following exhibitions in San Francisco and Boston. One can expect huge crowds and colorful visions that are full of surprise.
Chihuly’s Garden of Glass opened last spring in Seattle. The Seattle museum is adjacent to the Space Needle and Frank Gehry’s Experience Music.   Over Labor Day weekend, I had the pleasure of going to Seattle when it wasn’t raining, thanks to my niece for choosing the right time to have her wedding on Bainbridge Island.

September is lovely in Seattle, and when the sun is out, the full spectrum of the colors can be appreciated.  It may not be as bright in winter, but if I had to live there through the rainy winters, the colors  probably would give me some solace.  Chihuly is a native of Tacoma and it is a wonder that he developed such color and technique in this climate. Chihuly studied glass blowing on the island of Murano, near Venice, Italy, one of the few places known for making exquisite glass. Glass blowing techniques go back to the Egyptians, and the Romans learned from them.   Surprisingly, there are many other glass artists and craftsmen working today, but we really have to credit Dale Chihuly for bringing back artistry, craftsmanship and popular interest into the art of glass. There are many rooms and sections of the indoor museum, including a section of Native American weavings which have influenced the artist.  To me the Glass Forest, below,  is the most impressive interior room.  Circles, swirls, and organic shapes compete for attention against a black background. Before leaving the building, flowers of glass hang from the ceiling.     Light, color and reflection give a endless array of design.

The Chihuly Garden of Glass is permanent but the Virginia Museum exhibition will last until February 10th.  Going along with its exhibition, the museum made and recently this video of Dale Chihuly in his studio.  He obviously needs a host of workers in the Walla Walla Studio to make these magnificent organic visual wonders. 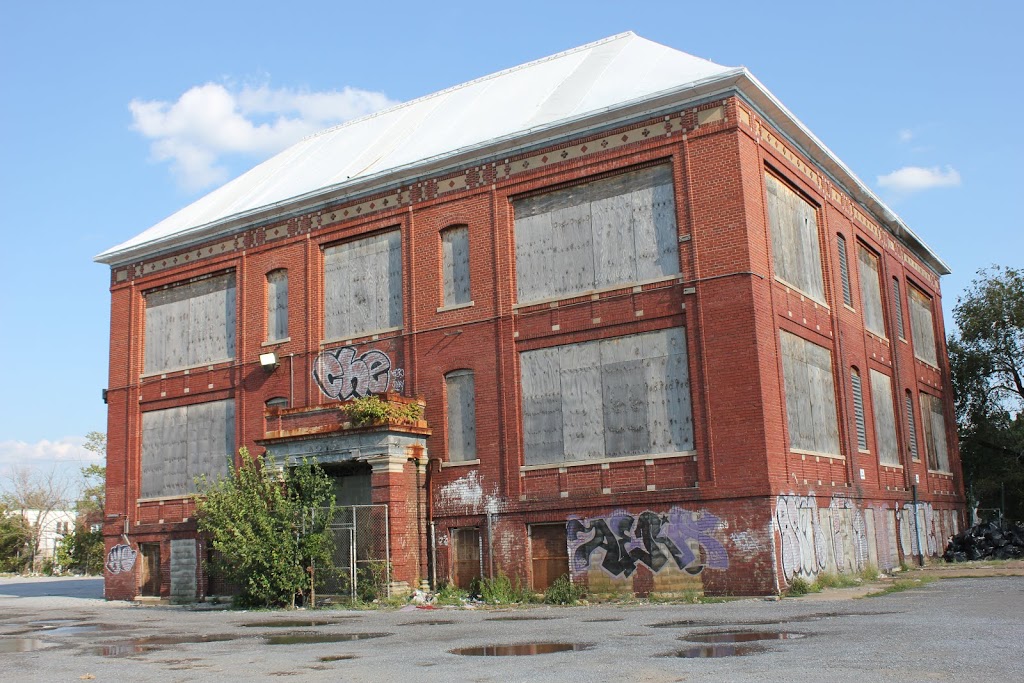 A Beacon of Light for Ivy City

by admin | Apr 11, 2012 | Architecture, Art and the Environment, Landscape Design

There will be new light for an old building. A project is in the works for
Crummell School in Ivy City, Washington, DC. Abandoned for about 30 years,
the 100-year old landmark will get new life soon. A friend and former student, Christina Ditto, chose, as part of an MFA graduate project in Interior Design at the George Washington University, a proposition to redesign the 100-year-old Alexander Crummell School into a community center. This architectural gem of a building, located in Ivy City on the Northeast side of Washington, DC., closed as a school in the 60s and was eventually abandoned in 1980. It sits on 2.5 acres amongst a pothole-ridden parking lot.Crummell School was the first complete building of the city’s first municipal architect, Snowden Ashford. The decorative details of this centrally-planned building, its large windows and elements of good design are a treasure we would hope not to lose in the future. City First Enterprises, DC’s Architecture for Humanity and another foundation have committed to build a new community center within its walls. In supporting rehabilitation of the building, Jeffrey Stoiber of Stoiber and Associates in Washington, DC, has committed to work on the project. Christina’s ideas and drawings, based on the concept of connectivity, are presented here. Designer Christina Ditto’s plan calls for a two-story Great Hall to be opened inwith a skylight in the center and extended to the east and west wings. This spacewould facilitate connectivity and be used for events. Christina talked to residents and asked them what they would like. Their answer is a community center and more green space. Her project gives residents more landscape, workable gardens, meeting space, classrooms suitable for all ages and an underground parking lot.

Christina’s plan for the building keeps the center open as the Great Hall. This central space extends 2 stories high into the east and west wings which are covered with vertical gardens. An 8-foot circular skylight in Christina’s design sits in the center of the Great Hall and is reminiscent of a cupola that was once there. Although the existing building already features large windows, in this design the windows, skylight and vertical halls function together to keep the central area filled with natural light. The floor plan has a radiating, open arrangement. The Great Hall would have
a tree and organic floor designs made of pennies donated
and put into place by residents of Ivy City.

The concept of this design is connectivity, connecting Ivy City residents to others, the community and the environment. Seating arrangements throughout the building support the idea of connectivity. Existing stairways remain in place, while the corners of the building on the main and second levels contain various types of classrooms, including an arts studio, fitness studio and computer lab. The second floor would include arts and fitness studios. Both floors have a Greek cross plan
within a square, reminiscent of a Palladio design.
I am reminded of the radial design of Andrea Palladio’s Villa Capra, “La Rotonda” in Vicenza, Italy. The school itself and Christina’s design have a similar beauty in simplicity and harmonious proportions. Like many of Palladio’s designs, this plan considers vistas of light and unifying interior and exterior spaces. The school never had the grandiose quality of a Palladian house and porticos would be inappropriate to the purpose, but the floor plan is similar. The ground floor, below the main level, would house two kitchens, one for the café and another as a teaching kitchen. For the most part Christina’s designs go along the building’s original plan, but she added two doors opening out to two terraces on the lower level and flow into the landscaped grounds. As in Palladian designs, the main floor of the Crummell School is raised
A lower level, where the kitchens are located, would open up to terraces.

Consistent with residents’ wishes, Christina’s site plan called for the parking lot’s redesign to hold two basketball courts and horseshoe pits, in addition to park and garden space. By moving the parking lot underground, more green space is created. Several garden plots would be available for community residents to grow vegetables for themselves, for the café or classes held in the building, and to learn about healthy food and cooking in the teaching kitchen, accessible from those ground-floor terraces. There’s new hope for the future of the 2.5 acres on which Crummell School sits. Gardens
and basketball courts could replace the parking lot with broken-down buses and potholes.

In 2003, Crummell School was put on the National Register of Historic Places, thereby protecting it from being torn down. In August, 2011, the city asked developers to come up with a project for development, hoping they would see its potential as a charter school, but the 20,000- square-foot building is small by today’s standards. Crummell School was named after Alexander Crummell, an important abolitionist and African- American minister, who was the rector St. Luke’s Episcopal Church in Washington from 1875 to 1894. The school itself has sentimental value to the lifelong residents Ivy City who fondly remember it. It’s a remnant of segregation in Washington DC schools, but it kept the community together and was a true neighborhood school, as long-time residents recall.

Crummell School was built in 1911, and is a remnant of
of the past period of segregation, not only by race. A lintel
above a door shows that girls and boys used separate entrances.

Snowden Ashford supervised all building in Washington between 1895 and 1921, but he was most proud of his schools, which also include Duke Ellington School of the Arts in Georgetown and Jesse Reno School. He was the architect of several fire stations and an addition to the Eastern Market, built in 1908 before Crummell School.

We don’t seem to have community schools any longer, but with a new community center Ivy City can have its neighborhood feeling once again. Crummell School is on 1900 Gallaudet Road, NE, just off New York Avenue, and near Gallaudet University.Christina is proud of her role in providing the stimulus for giving the neighborhood a community center, and new life to a significant building by Washington’s first municipal architect. Stephanie Travis, Director of the Interior Design program at the George Washington University, brought in the involvement of charitable foundations.