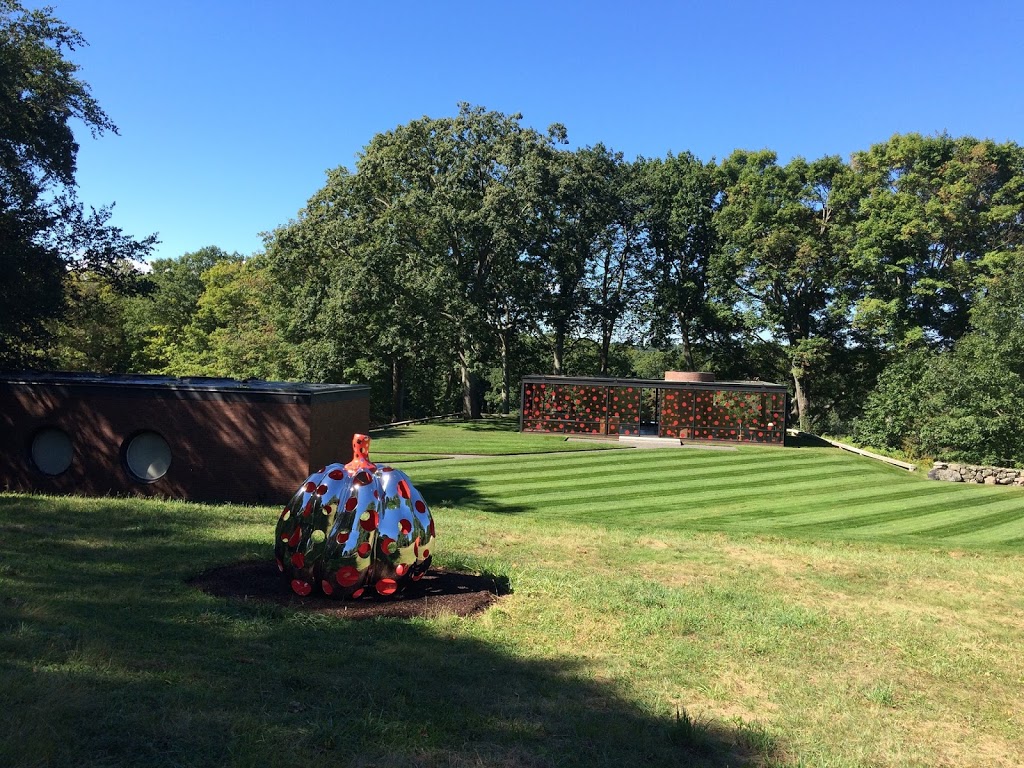 Yayoi Kusama is now the featured artist as the Hirshhorn Museum and Sculpture Garden.  Crowds are lining up out the door to see her exhibition, “Infinity Mirrors.”  It’s a blockbuster show made up of mirrors and dots that’s capturing the public imagination with huge crowds.

When I went to visit Philip Johnson’s Glass House in Connecticut for the very first time in September, there was an installation of Kusama’s art in the house and on the property.   Red polka dots of various sizes were attached to all the glass walls. To me, the dots fit perfectly into Philip Johnson’s iconic house–as flat red circles on a very flat building.  Some visitors at that time remarked that it interfered with how they had hoped to appreciate “The Glass House.”  But the dots didn’t interfere with the building’s transparency. Shadows and reflections appeared that would not have been there otherwise. Perhaps the dots made me even more aware of the house’s transparency, and color shined through along with the light.
As for the Johnson property, there’s an eclectic mix of buildings, 14 in all.    They’re totally different from each other, representing the great diversity in Johnson’s architectural genius.  Each building was a work of art in itself, with a sense of wholeness to it.  Set into the landscape of 49 acres, it is part of something much larger than itself, an entire park or environment. The polka dots of Yayoi Kusama are much the same.  They’re small pinpricks in the center of something much larger.    In reflecting on the dots, and in experiencing a multiplicity of dots, we become aware of the universe much larger than ourselves.   We go outside of ourselves, into the larger universe.  Presumably the Hirshhorn exhibition will make that world seem infinite and thus the title, “Infinity Mirrors.”

The difference between Kusama’s installations at The Glass House and in “Infinity Mirrors” is the difference between seeing the expansiveness of life in nature and being inside of our own small world and being forced to expand outward. The Hirshhorn is expecting an explosion of “selfies” taken at the exhibition. Visitors will only be allowed in the six installation rooms, with the doors closed, for a limited amount of time.

Kusama displayed one of her large pumpkins on the grounds of the Glass House.  The metal sculpture was pierced with polka dots and has a red interior. Kusama’s pumpkin theme repeats in one of the six installation rooms of the the Hirshhorn Exhibition.  It’s an installation called “All the eternal love I have is for the pumpkins.”   (One of these glass pumpkins broke last Saturday, forcing a temporary closing of the exhibit.)

Pumpkins, like the polka dots, are a lifelong obsession for the artist.  According to Kusama, “In Japanese, a ‘pumpkin head’ is an ignorant man or a pudgy woman, but for me, I am charmed by its shape, form, and lack of pretension.”    There’s a humor in Kusama work, too.

The Glass House’s Kusama installation also featured mirrors in an entirely different form — different from those at the Hirshhorn.  They were spherical balls in a pool of water called Narcissus Garden, surrounding the Pond Pavilion designed by Johnson. They spheres, 1300 of them, each 30 cm wide, moved and floated with the ponds currents.  They reflected the sky, the water and land.  Like Monet’s Water Lilies, Kusama’s water art unifies the elements of water, earth and air, except that it’s not done in a series of paintings. Its a form of kinetic sculpture.  In it’s effervescence, Narcissus Garden reminds me that some things can never appear the same again.

Kusama, born in 1929, is now 87.  She moved from Japan to New York in 1957 and played an important role in the avant-garde movement of the ’60s.  She participated in events with Yoko Ono, Nam June Paik, Charlotte Moorman and Allan Kaprow, instances of performance art called “happenings.”  But in 1973 she moved back to Japan, exhausted and suffering from hallucinations.  She has lived in a mental institution since that time. There was a rebirth of interest in her art in the late ’90s.  Her work perfectly embodies Pop Art and Conceptual Art, bridging the two movements, as well as Environmental Art and Performance Art.

The public appreciation for installations and Conceptual Art has finally risen, giving her the broad audience she has today. The Hirshhorn Show is a retrospective celebrating 50 years of her life as an artist.  It will travel to four other museums around the US and Canada.  Sometimes it takes a life time of work and struggle to finally achieve what you’re here for and today is her time. (The Narcissus Garden is a variation she had introduced years ago at the Venice Biennale in 1966.  The “Infinity Mirrors” concept actually goes back in Art History, used in the Hall of Mirrors and integrated into the design of the Palace at Versailles.)

According to art critic Philip Kennicott, Kusama says, “My art originates from hallucinations only I can see. I translate the hallucinations and obsessional images that plague me into sculptures and paintings.” Is it a combination of the obsessiveness in OCD and the hallucinations of schizophrenia?   If it is mental illness that creates this great art, then we can recognize mental illness as a special gift and not stigmatize these people who suffer from it.  (Read Philip Kennecott’s Review.  He sees her as criticizing the art world’s narcissism. I believe that criticism is justified.)

She has given us a visualization of the connectedness of all life. The only other contemporary artist who does it so well is Anselm Kiefer, or possibly Bill Viola (now at SAAM). Kiefer and Kusama distinguish themselves with their spiritual insights.  And her audience is enriched, coming away with an understanding of life that is so much fuller. Can’t wait to see the Hirshhorn show.
(The best article on the Glass House exhibition is from DeZeen.)