“Not a Painting But a Vision” 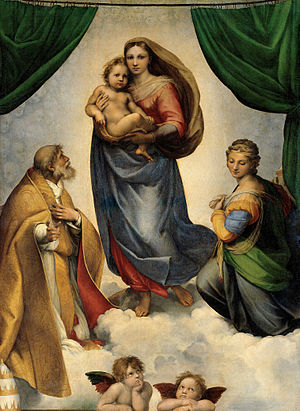 Last weekend the annual Sydney J. Freedberg Lecture on Italian Art at the National Gallery of Art was “Not a Painting But a Vision.”   Andreas Henning, curator from Dresden, Germany, spoke about The Sistine Madonna, a magnificent altarpiece Raphael painted in 1512 which is now in the Dresden State Art Museum.   I have written about it in a previous blog, comparing the Mary of this painting to the  Raphael’s lovely image of inner and outer beauty in La Donna Velata. 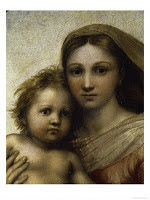 However, as the title suggested, it is painting of a vision and that Mary is not of this world.  She has facial features of that generic beauty similar to those of the Donna Velata, but she is more ethereal and otherworldly.  As much as we may want to reach out and hug the baby Jesus, we can’t. The Madonna also carries a tinge of sadness in this image, a practice artists used to reveal Mary recognition that her Son will die someday.

However, two saints, Saint Sixtus and Saint Barbara have brighter colors and lead the transition to the audience on earth.  The curator explained that they represent a reconciliation of opposites, as we often find in Raphael’s paintings.  They are male and female, old and young, the active life and the contemplative life.  But the truth is that they, too, are in heaven.

When the Sistine Madonna was completed and set as an altarpiece in a monastery church in Piacenza, we must imagine curtains framing the Mary, her veil blowing in a wind, as separating one world from  another.  The drama is in the relationship of the audience to the vision in the work of art.  Only the saturated green curtains and a balustrade on bottom are meant to be part of the material world. In fact, in this visionary painting, Raphael has gone behind the Renaissance perspective which aims for imitation of reality.  He anticipated the triumphant late Renaissance artist Correggio and the visionary art of Baroque, such as Bernini’s Ecstasy of Saint Teresa.

I’ve never seen this painting, but was thrilled to view the new slides since the painting’s cleaning. In the background, the clouds reveal the faces of many more cherubs.  There are 42 faces in the clouds.  (These faces are mainly visible in first image on the upper left side.) What glorious illusion! 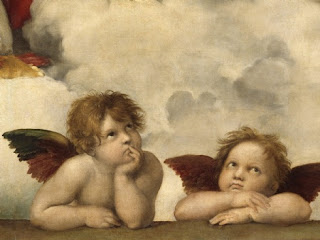 The curator also pointed out that these sweet and precious angels, who look upward in observation and wonder, were an afterthought which Raphael  felt the composition needed them for completion.  What impeccable images of innocence, charm and love!

The Veiled Woman, Part II: In the Chapel of Love 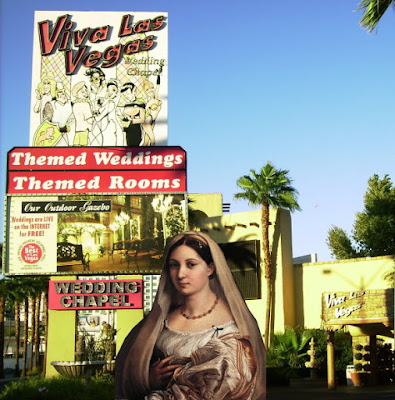 My friend at Smashedpc.com sent me this photo of the Veiled Woman in Las Vegas, while another friend said she should be the Madonna in the Elvis Wedding Chapel. 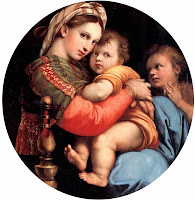 What a combination, but hardly more ironic than using Raphael’s Madonna of the Chair, right, in one of the interior settings of the Desperate Housewives‘ TV show, although the neighbors on Wisteria Lane hardly embody the ideals of Raphael’s beautiful women.
As I’m thinking of it more and more, it seems that The Veiled Woman may represent Raphael’s ideal for a perfect womanhood more than a real person, the same ideal behind his images of Mary at this time.  She looks like she could be the mother to Raphael’s bambini Jesus of this time, also portrayed as the perfect chubby baby.   For example, the Madonna of the Chair, left,  has a similar face, but is almost in profile. 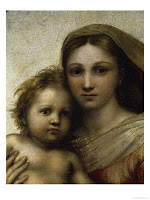 The Sistine Madonna, right, has the same face in a frontal view. Either the same model is seen in these three paintings or the artist used the same “ideal” features to  represents a concept of female beauty. During the Renaissance, it was thought that a virtuous woman of beauty could tame a man and make him a better person.

If Raphael painted his portrait of Baldassare Castiglione, author of The Book of the Courtier, as the ideal gentleman, the veiled woman is his match. Although his features are more specific than hers, they are in similar poses with large abundant sleeves and both wear a headdress. If he is unified in blacks and grays, she is unified in variations of white and beige, also in a brown background. Donna Velata is warm and approachable while Castiglione is self-contained. To me, he is dark and brooding, even sad; she is a more optimistic and outward-looking image. 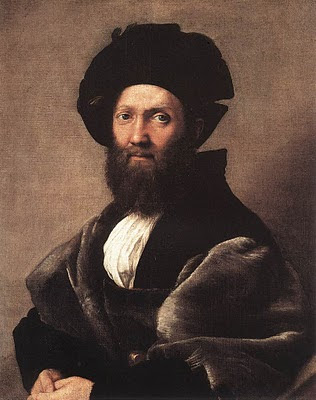 In the end, are the portraits of the Donna Velata and Baldassare Castiglione two parts of the same coin, a reconciliation of masculine and feminine as well as other opposites of human nature? Is she the hopeful and calming influence needed by this gentleman in the same way this loving, brown-eyed woman can tame desperate housewives, casinos and neon-studded venues in the American west?
Copyright Julie Schauer 2010-2016

The Veiled Woman – Who is She? 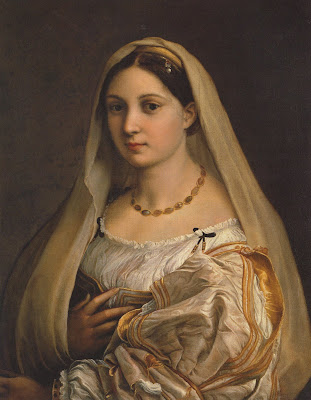 Over a Thanksgiving trip to Portland, Oregon, I came upon a pleasant surprise, Raphael’s Donna Velata, was visiting the Portland Art Museum for a one-painting loan exhibition. One of my top 10 favorite paintings, I had last seen the veiled lady at the Art Institute of Chicago 10 years ago, when two Renaissance portraits had been sent from Florence in exchange for five Monets.

Who is this Donna Velata, this remarkable woman, who is succeeding in the quest to bring crowds into smaller regional museums? How can she capture so much attention? She is not as well known as the Mona Lisa, but most of my students past and present have stated a preference for the kinder, gentler vision of womanhood presented by Raphael over the all-knowing, godly woman of Leonardo.

The white lady wins over the shadows of Mona Lisa. Donna Velata’s dress is luxurious, full, silky and lined with gold. The sleeves are voluminous. An elegant necklace doesn’t detract from the welcoming gaze from that lovely face where the eyes alone can hold our attention. Invisible lines between the eyes’ inner corners lead directly downward to where her fingers point between the breasts, perhaps a suggestive motif, however subtle. We are quickly pulled back up to those captivating eyes.

Certainly Raphael put a great deal of love into this portrait and she appears to be the image for Raphael’s Madonnas of the same time. Giorgio Vasari, seeing the painting 1550, wrote that the subject was Raphael’s lover. Some scholars claim similarities in appearance to the slightly later portrait of La Fornarina, a bare-breasted, more provocative image with a harder finish and less appealing mouth and chin. Either woman could be Margherita Luti, whom the artist appears to have loved but never married, as he provided for her in his will when he died prematurely at age 37.

When the Art Institute exhibited the painting, its literature argued that the portrait may have been someone’s wife, because the veil was a convention of married women in Rome when it was painted, probably between 1513 and 1516.

Regardless of its meaning, the veil brings harmony to the composition and unifies the color, a balance of mainly whites, neutrals and small touches of warmth. The beige of the veil blends with the white of flesh, a tiny but luminous pearl and the sparkling dress. Unity and perfection are goals of both the Donna Velata and the Mona Lisa. Raphael explained his perceptions in a letter: “I do make with a certain Idea that comes into my mind” Raphael’s Idea is an idea of beauty something more beautiful than can be found in one woman, and must be searched for in many and then portrayed through the mind’s eye. Certainly Raphael’s Idea evolved over time in his career, as hair changed from medium tones to dark brown, eyes grew larger and face became rounder, lips fuller.

No reproduction can capture her beauty, as shadows in photographs tend to harden her real softness. Her eyes–deep, brown and open–engage the viewer, inviting us into her warmth and love. She is kind, generous, forgiving, indeed an ideal of womanhood and all humanity. Furthermore, as we are directed to her face, unadorned with makeup and framed by simple, pulled-back hair, we note a lack of pretense and utter earthiness. The clothes and necklace are unnecessary for the real drawing power of this natural beauty. If we think she is too perfect and that humans cannot achieve this state of being, I noted one imperfection–a dangling hair out of place, seldom seen in photos. She is mother to all, a person we can aspire to be. You must see her in real life to become fully immersed in her warmth and love. It is not who she is that is so important, but the aspiration for what humanity can become that she represents.

Portland, Milwaukee and Reno, Nevada will have the opportunity to see her. Whether or not she can compete with the attention given to casinos in Nevada remains to be seen. It is ironic that her simplicity and grace will be so close to the glare, glitter and aesthetic overkill of Las Vegas, not to mention greed and debauchery–the latter which call to mind one theory that fine art can bring moral improvement. Is this a case where art’s purpose is to morally uplift us where and when it is needed most?