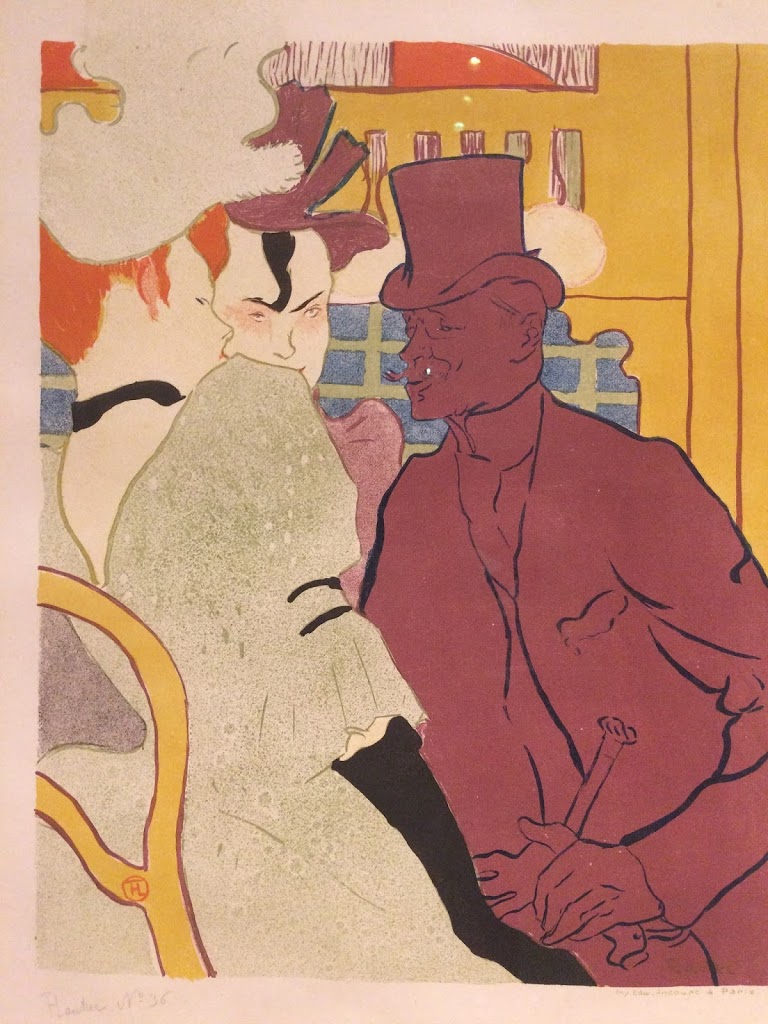 This is the last weekend of Phillips Collection’s exhibition,Toulouse-Lautrec Illustrates the ‘Belle Epoque.’  The Phillips organized the show with the Montreal Museum of Fine Arts, its only other venue North America. This exhibition is different and distinguished from other exhibitions of Henri de Toulouse-Lautrec (and I’ve seen a few of them), because it’s primarily graphic art and contains some works that we don’t normally see. There are trial proofs alongside the finished prints, and a few very rare prints. The entire show comes from one private collector in France and we’re very lucky to have it for a short time in Washington.
Toulouse-Lautrec’s color is magical but it’s really his sensational line that was his greatest gift.  He follows a string of other great 19th century line artists: Ingres, Daumier, Degas and Hokusai, but he broke entirely new ground in the world of graphic art.  In this exhibition, some of the familiar posters are shown in different stages, and it’s a great starting point to understand something of the lithographic process.   Lautrec mastered the medium of color lithography, using multiple stones for the different colors of ink.

He’s best known for creating poster advertisement for entertainers and other highlights of Paris night life. Certainly he did a lot to bolster the careers of certain singers and performers such “La Goulue,” Jane Avril and Aristide Bruant. His posters were all over the kiosks of Paris and his work began a new trend.  Although Lautrec was from an aristocratic background, he reveled in the demimonde and the bohemian lifestyle.  He captured the people, places and events with so much vitality that the viewer almost wishes he or she could be there.  The “Belle Epoque” is the beautiful era and in the USA it reflects the time of “The Gilded Age or “The Gay Nineties.”

Depicting the subjects with wit and whimsy, and it’s clear that Lautrec’s art always captured much more than a photograph could.  Sometimes his faces seem to be sneering at us.  His expressive, calligraphic line is pure magic in how it captures a quick impression.   He also masters the integration of letters into design, an essential for good graphic art.  He portrayed Jane Avril several different times — in 1893, in the Divan Japonais, with Mademoiselle Eglantine’s Troupe and again in 1899.   The poster of Jane Avril from 1899 is particularly effective in design.  Her undulating lines take up the entire picture from top to bottom, twisting to the right and then off the page on the left.  It’s utterly simple, but effective design

Furthermore, it’s not only performers and night clubs that he enjoys. One of his friends, Sescau asked him to advertise his photography studio.  He sets the fashionable lady in the foreground, running away from the photographer.  With his sly humor, he makes suggests that photographer friend is looking at her in other ways, too.  In a brilliant display of his design talent, the frills of this woman’s flowing cape match the rhythms of design in her fan, flowing in the opposite direction off the edge of the page.

Like other artists of his time — Van Gogh and Munch — he used jumps in space to heighten the meaning.  It works well with the poster; the graphic artist’s challenge is to say a great deal with a minimal amount of detail and definition.   In one of his most famous works, La Goulue at the Moulin Rouge, the master of ceremonies is at the picture plane.  He’s merely a silhouette with pointed fingers, pointing to the artist’s signature put also to the celebrity whose dancing a can-can.  Le Moulin Rouge was a 1890s version of “Dancing with the Stars.”   Guests were able to mix and mingle with their favorite celebrities, and to dance alongside them.

Of course the Moulin Rouge was also memorialized with a fictional character played by Nicole Kidman in Baz Luhrmann’s 2001 movie, Moulin Rouge. The story, but not the aesthetics in the move, fit with the time and place.  John Leguizamo played Toulouse-Lautrec as an affable, good-natured character.   Since childhood accidents and perhaps a genetic disease kept him from growing to normal adult height, he felt comfortable with other outsiders.

In actuality, La Goulue was Louise Weber, who had moved from the country (Alsace) into the city as a teen. She was approximately 24 at the time of her stardom as one of the most popular dancers in Paris.  Her nickname, “the glutton” probably refers to how she took from others — food and drink.By the time she was 30, she was tired, wasted, impoverished and alcoholic. (In his prints, and paintings, she’s always recognized by her topknot. ) Unfortunately, there’s similar sad tales played out by some young stars today.

Many other famous posters are on view in full splendor, including images of Aristide Bruant and Marcelle Lender.  This must-see exhibition is pure visual delight. It also offers a great deal of technical information about Lautrec’s astounding graphic techniques.  This is just a small sampling of the many fantastic posters, paintings and graphics that are part of the exhibition.
Copyright Julie Schauer 2010-2016