Celebrating African-American Art and Life in the 20th century 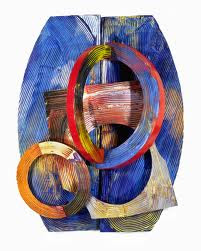 Smithsonian American Art Museum’s exhibition, African American Art: Harlem Renaissance, the Civil Rights Era and Beyond gives a broad overview of 43 artists whose work spanned 8 decades of the 20th century.  Over 40 photographs, as well as paintings, give a provocative picture of urban and rural life during the Depression, the age of segregation and the Civil Rights and later.  Although there is some overlap with other 20th century art movements, the exhibition is mainly art focused on African-Americans and their lives.  Both abstract and figural paintings are included, but also sculpture by Richard Hunt, Sam Gilliam, an important recent figure in the art scene of Washington, DC.   The artists come from the South and North, with a large number from urban areas of Detroit, New York, St. Louis, Baltimore and Washington, DC. 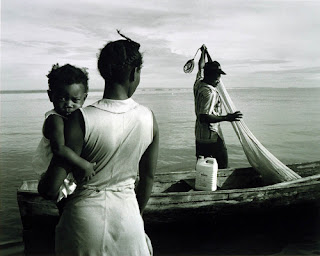 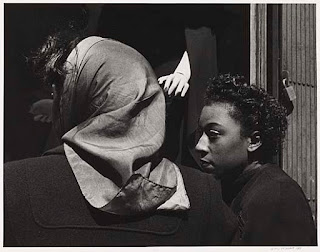 Detroit artist Tony Gleaton recorded his travels to Nicaraguain in Family of the Sea, 1988,  from the series Tengo Casi 500 Anos: Africa’s Legacy in Central America, above.   Roy De Carava was a New Yorker whose photos capture aspects of city life  as in Two Women Manikan’s Hand, 1950, printed  1982, on right.  (gelatin silver prints)

The portraits give impressive concentrated views of individual personalities, particularly by Tony Gleaton and Earlie Hudnall, Jr. I especially liked the photographs of Ray DeCarava, for the artistic compositions with interesting value contrasts. Although the portrait photography is very interesting, I’m partial to DeCarava’s staged compositions which look like film stills. 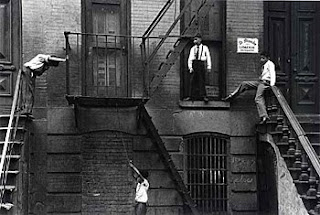 Gleaton’s works are part of series photos, such as Africa’s legacy in Central America.   But there is also a series from the WPA (Works Project Administration of the 1930s, part of the New Deal.   Robert McNeill ‘s several photographs include those from his project entitled, The Negro in Virginia which has both interesting portraits and slices of life.  The art of photojournalism really began at this time, during the 1930s.

The contrast of black and white photography works well exhibited next to bold, colorful works of art by the Harlem Renaissance artists, such as Jacob Lawrence and Romare Bearden, who worked with collages.  Bearden, Lawrence, as well as Lois Mailou Jones and Norman Lewis, are among the most important painters who contributed to the artistic life of Harlem in the 20s and 30s.  The Harlem Renaissance also produced writers, musicians and poets such as Langston Hughes. 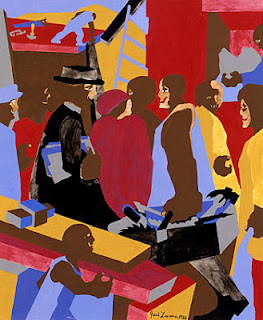 Community, by Jacob Lawrence is a gouache of 1986.
It is a study for the mural of the same name in Jamaica, New York

Lawrence lived until 2000 and spent his last 30 years as a professor at the University of Washingon in Seattle.  The exhibition has both an early and a late work.   Lawrence maintained a similar style in the   later work, always influenced by colors in Harlem which he said inspired him.  Lawrence’s most famous works are the series paintings, The Migration Series, half of which is in Washington’s Phillips collection, and the Harriet Tubman series and the Frederick Douglas series at the Hampton University in Hampton, Virginia, where another large collection of African-American art is kept. 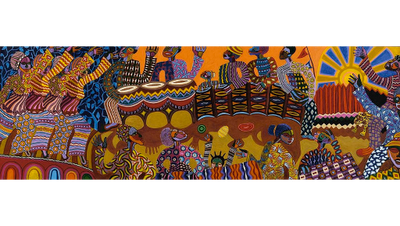 Charles Searles’ Celebration is an acrylic study for a mural painting
in the William H Green Building, Philadelphia, made in 1975 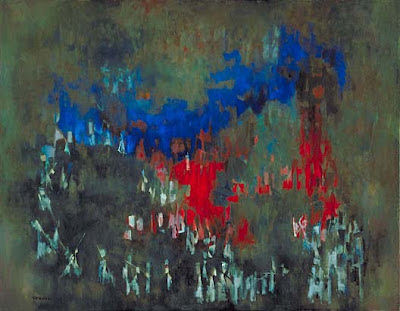 Abstract works may actually be visualizations with other meanings.  Norman Lewis’s Evening Rendezvous of 1962, is an abstract medley of red white and blue, but the white refers to hoods of the KluKluxKlan and red to fires and burnings.  Not all is innocent fun, but Enchanted Rider, done by Bob Thompson in 1961 is more optimistic.  The rider may actually be a vision of St. George who triumphed over evil and is a traditional symbol of Christian art. 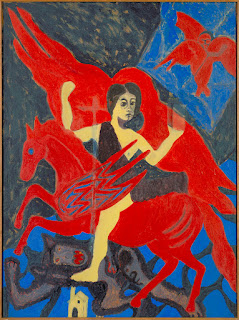 Though the exhibition is somewhat historical, it wants the viewer to judge each piece on its own merit, and to see it as a unique expression of the individual artists.  There is not a heavy emphasis on chronology or history.   Lois Mailou Jones is one such personal, but symbolic artist who picked up ideas from living in Haiti and traveling to 11 African countries.  In Moon Masque, 1971, pattern, fabric design and African rituals are evoked.  I like the color in most of these paintings and the celebration of life so vividly expressed in these works. 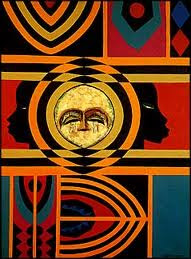 The Smithsonian American Art Museum has the largest collection of African-American Art in any one location, but this exhibition is only a portion of their collection.  Some modern masters, such as Elizabeth Catlett, Faith Ringgold and Perry James Marshall, are not included in this showing.  After the exhibition closes in Washington September 3, it will travel to museums in Williamsburg, Orlando, Salem, MA, Albuquerque, Chattanooga, Sacramento and Syracuse for the next 2-1/2 years.