The Splendor of Knossos and the Minoans 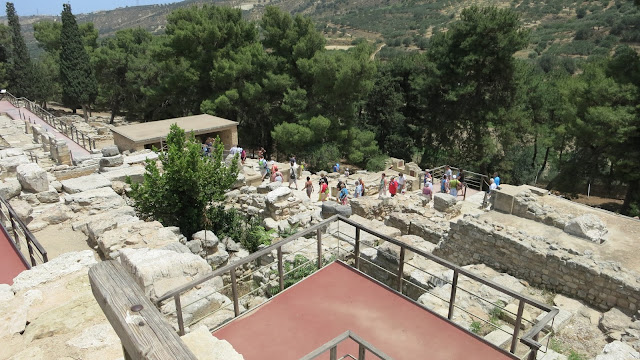 This summer I finally had the opportunity to go to Greece and see the sprawling Palace at Knossos.  Actually, it’s not certain if this site was a palace, administrative center, giant apartment building, religious/ceremonial building, or all of the above.  Yet it is so huge that, when discovered in 1900, archeologist Arthur Evans certainly thought he had found a true labyrinth where the legendary King Minos lived and kept his minotaur.  The name Minoan for the Bronze Age people who lived in Crete from about 2000-1300 BC has stuck.

According to legend, the king of Athens paid tribute to King Minos by sending him 7 young men and young women who were in turn fed and sacrificed to the half-man, half-bull minotaur. Eventually, with the aid of Minos’ daughter and the inventor Daedalus, Theseus carried a ball of thread to find his way out and to slay the beast.

Although the art at Knossos doesn’t play out the precise myth, carvings and paintings found there involve imagery of bulls.  Acrobats jumped and did flips over the animals’ horns, perhaps part religious ritual.  It must have been an exciting but highly dangerous sport, and it’s easy to understand that as the story changed over time, later generations would envision a bull-headed monster in a spooky maze.

Could a prisoner escape without Theseus’ clever trick?  Three or possibly four entrances to the palace are off-axis and may have appeared entirely hidden.   The building also had windows, light wells, air shafts and ventilation.  It was an engineering marvel. No wonder its architect Daedalus became a god to the Greeks. When I was there, it not only felt like a “labyrinth,” but also like “babel.”  Its the only place I’d ever been where so many different, unfamiliar languages were being spoken at once.  Despite the number of people, it never felt too crowded, because the palace covers six acres.

The building runs over 5 levels of twists and turns, on the hillside, not on top of a hill.  It had 1300 rooms at one time and could have housed as many 5,000 people.  There’s a large central courtyard, perhaps where crowds observed the bull-leaping sports. At least four other ancient maze-like palaces have been excavated on other parts of the island, but none as large as Knossos.  It is thought that only 10% of Minoan Crete has been excavated and that bronze age Crete had 90 cities.  I remember reading that Knossos had a population of at least 100,000 people around 1500 BC.  Minoans traded with Egypt and Mesopotamia.   Archaeologists have uncovered a Minoan colony in Egypt, Tel-el D’aba, and at Miletus in Turkey.

Evans spent 35 years digging, researching and restoring the Palace of Knossos.  The restoration reveals the Minoans’ unusual, downward-facing columns, with the narrowest parts on bottom.  The earliest builders used the cypress tree and turned it over, so it wouldn’t grow.

There were both small frescoes and life-size frescoes, most of them now in the Archeological Museum in Heraklion, including the bull-leaping fresco.  Since Egyptians painted in secco, on dry plaster, it’s believed that Minoans invented the fresco technique of painting on wet plaster. Colors such as blue, red and yellow ochre are very vivid.  Generally Minoans painted with a freer and more organic style than the artists of Egypt and Mesopotamia, and often had more naturalistic depictions.  However, whenever men or women are found marching with erect stiff postures, it’s conjectured that they functioned as priests and priestesses partaking in the religious rituals.  There’s a famous bull-leaping fresco in the local museum.

Archeologists of today would not take as much liberty and restore as extensively as he did.  While Evans  pieced together restorations of the palace based on the remnants and shards, he also used his knowledge to restore what is missing.  Personally I appreciate that his reconstruction fills in the blanks for us, giving an idea of the size and grandeur of the palace.  Also, there’s a great deal to speculate as to what it may have been like to live there.  It seems that grains, wine and olive oil may have been milled and pressed at the palace, and also stored in huge pithoi (giant vases) under the floor.

The word labyrinth originates from the labrys, a double-axe related to the double horns of the bull.   The language used at the time the first palace was built, around the beginning of the 2nd millennium BC, has not yet been deciphered.  A second language which appeared at Knossos after mainland Greeks took over the palace after 1500 BC has been translated and is related to the classical Greek language

All the inscriptions on cylinder seals are commercial records and inventories.  Besides myth, the art and artifacts are the best way to figure out the story of these people.  Only about 10 percent of the ancient Minoan sites have been excavated.  Although the contents of the Archeological Museum of Heraklion, near Knossos, is well known and published, the beautiful pottery and artifacts from the museum of Chania, Crete’s next largest city, have not been published.  Getting outside of the cities and into the countryside leaves the impression that the rural life really hasn’t changed too much in 1000 years.

Certain things that date to the Mycenaean takeover of the palace include the Throne Room.  Amazing, when the room was discovered, the gypsum throne was intact.  Evidence points to the suggestion that the palace had to be abandoned all of a sudden, because of a fire, natural disaster or invasion.   Even if this culture eventually went into oblivion for a few hundred years, when the Greek culture re-emerged around the 8th century BC, the Greeks culture retained so much of the Minoan heritage in its art and myth.  The myths of the minotaur, Minos, Europa, Theseus, Daedelus and Icarus involve Crete, but so does the story of Zeus who was said to be born in Crete.

Knossos has a theatre right outside the palace. Performances took place at the bottom of two seating areas set perpendicular to each other, rather than at the end of curved seating area as in later Greek theaters.  The ancient Minoans also gave the world two important inventions, indoor plumbing and the potter’s wheel.  Wouldn’t it be something if some of the first great Greek literary masterpieces also had an origin here, 1000 years earlier?

Occupation of the palace ended sometime between 1400 and 1100 BC.  In the classical era Crete was never as important as Athens, though it is clear that much of what formed later Greek culture came from Crete.  A settlement re-emerged in Knossos during Roman times, but during the Middle Ages the population shifted to the city of Heraklion, about 4-5 miles away.