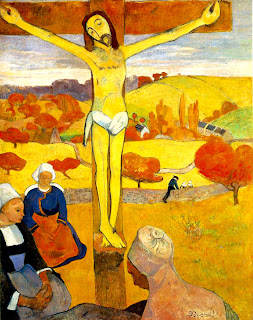 Paul Gauguin was impressed with the sincere, unspoiled piety of women from Brittany, where he painted in 1887. He placed the Yellow Christ, 1889, in a Breton landscape.
Paul Gauguin, an early modern rebel against western culture, is influenced by religious culture like his French forebears who painted for kings and churches 400 years earlier. After seeing the Art Institute of Chicago’s exhibition of Early Renaissance Art in France, I saw the Gauguin exhibition at the National Gallery. Many of Gauguin’s subjects also had religious themes. He put the Crucifixion in a setting of yellow and ocher pigments, and blended it into the landscape of Brittany, a region he respected for its piety and cultural backwardness at that time.

The standing woman in Delectable Waters, above, has the shame of Eve being expelled from the garden of Paradise. We don’t know her relationship to the other women, although they also seem to live in a lush tropical place, much like a Garden of Eden

Many of the paintings in Gauguin: Maker of Myth come from his Tahitian stay after 1891. He treats several scenes of Tahitian women and gods through the lens of Christianity and other religious traditions. It’s curious that the moon goddess Hina who appears in Delectable Waters, above, is actually in a pose from Hinduism that Gauguin morphs into this Tahitian image. In some canvases the Tahitian women, rather than Eve, deal with evil and temptation. He portrays human dramas of guilt, fear, agony and pain.

Why Are You Angry, from the Art Institute of Chicago, has always fascinated me. It also seems to have a mysterious theme of guilt or shame. This encounter between a standing lady and two seated girls who humble themselves creates a provocative drama separated by an old woman and a tree. Each woman is strongly modeled with lovely, brownish skin tones. The colors of this paradise blend warm hues of yellow and red with the cool, peaceful colors of mauve and blue.

Why Are You Angry, from the Art Institute of Chicago, exemplifies Gauguin’s ability to balance the warm and cool colors of nature, while the composition is balancing the various sides of the human drama .
Even before going to Tahiti, he painted of Christ’s Agony in the Garden, showing Jesus is a human who feels the same pain of rejection that we, as humans, do. He uses his own face as Jesus Christ. Bright red-orange hair is symbolic of the fire and pain of human suffering, which we see not only as Jesus but part of humankind. There are many self-portraits on view. Symbolist Self-Portrait from the National Gallery’s collection, shows the paradox of his own good and evil natures, making his choices appear like Adam and Eve’s. More powerful than ego promotion, these self-portraits are powerful expressions of the human dilemma. After all, he started out as a stockbroker, which clearly did not work for him. The exhibition has an impressive display of Gauguin’s sculpture and ceramics, even in self-portraiture.

The Agony in the Garden, is a Christian theme. Here Gauguin has given Jesus his own face, suggesting that he empathized and identified with the suffering of Jesus.

One can wonder if Gauguin ever overcame his pain, shame and reached a type of salvation in his final destination, Tahiti. Whether it was Eden, Tahiti or Gethsemane, he seems to paint so many gardens, the paradises for which he hoped. (He had spent a childhood in Peru, traveled to the island of Martinique, to the opposite corners of France, Brittany and Arles, in search of simplicity before arriving in the South Seas.) Curiously, there are no paintings representing his short stay in Arles with Vincent Van Gogh.

In the end, Gauguin leaves his meanings ambiguous, but color is Gauguin’s salvation as an artist.

Two Women, above, from the Metropolitan Museum of Art, shows Gauguin’s gift of color–not only yellow sky and brilliant red cherries. The woman to the right is painted with green hues beneath her brown skin, a wonderful match for her blue dress, while the other women has red under brown skin.