Velázquez, Ovid’s Myth and the “Spinners” of Fate

(Not for beginning art students; I was not able to understand or interpret this painting at all until teaching a class in Mythology.)

The study of myths in all cultures, like the study of art, may seem obscure but it can illuminate some truths about humanity.  Around the world, the beauty of weaving has some association with magic. So we look to Diego Velázquez’s Las Hilanderas (also called The Spinners, The Tapestry Weavers or The Fable of Arachne) which focuses on the weaving contest between Pallas Minerva and Arachne described in Ovid’s Metamorphoses.  The foreground scene is about a competition which includes spinning and carding, preparations that come before the weaving of tapestries. The final outcome of the story is implied, not shown. Velázquez used a complex composition of diagonals to weave a tale,  a fable that lovers of Charlotte’s Web should appreciate.

Velázquez often put humor into his mythological scenes, but The Spinners is not a satire. It’s related in theme to Las Meninas (The Maids of Honor), considered by a majority of art experts to be the greatest secular painting of all time.  The painterly effects of hair and material which dazzle us in Las Meninas go even further in The Spinners, which has a similarly complicated meaning.  Its format is horizontal rather than vertical, but it also features a foreground and background for two tiers of storytelling connected by an opening of light and stairs. As Las Meninas is a group portrait disguised as everyday life in Velázquez El Escorial Palace studio, Las Hilanderas is a narrative posed as a genre scene in the dress styles or 17th century Spain.  It’s dated one year after Las Meninas, 1657.

According to Ovid, Arachne was a girl born to humble parents in Lydia (an area of Turkey famous for beautiful weavings). She was reknown for her remarkable skill, but did not see her art as a gift from the goddess of weaving.  Arachne accepted praise that set her above Pallas Minerva (Pallas Athena–also the goddess of wisdom) in the art of weaving.  She said, “Let her compete with me, and if she wins I’ll pay whatever penalty.”  So Pallas Athena disguised herself as an old crone, saying “Old age is not to be despised for with it wisdom comes…..seek all the fame you wish as best of mortal weavers, but admit the goddess as your superior in skill.”

Arachne wasn’t humbled and said “Why won’t (the goddess) come to challenge me herself?”  Athena then cast off old age and revealed herself.  Arachne was not scared and immediately took up the challenge of the competition.   In foreground of Velázquez’s canvas, Athena (in a headscarf) and Arachne set up their spinning and carding operations in preparation for the weaving competition.  At least three assistants are helping in the task.  There are balls and balls of wool and thread and even a cat, but no looms in sight.

Just as Shakespeare liked to insert plays within his plays to elucidate the story, Velázquez was fond of putting subsidiary stories in his paintings.  Another episode takes place in the background, although Velázquez skipped parts and hinted of the conclusion under the archway. Here Athena wears her goddess of war helmut. There are the same number of people in front as in back, five.  It would be reasonable to believe that the young women in the back are the same assistants who help in the foreground, but have changed their clothing into fancy dresses.  Only the lowly-born Arachne, furthest from the viewer, is modestly dressed.

According to Ovid’s tale, when goddess and girl had completed their tasks, Athena revealed her tapestry with its central subject of Athena winning her competition with Poseidon to be the patron of Athens.  She wove an olive vine from her sacred tree into the tapestry’s border. Secondary scenes showed the power of gods and goddesses as they triumphed over humans. The subject of Arachne’s tapestry was stories of trickeries by gods and goddesses, at the expense of mortals. She had shown as her central subject as the rape of Europa by Zeus in the form of a bull.  This scene is recognized in the back of this painting as a replica of Titian’s famous painting of that subject in the Spanish royal collection. 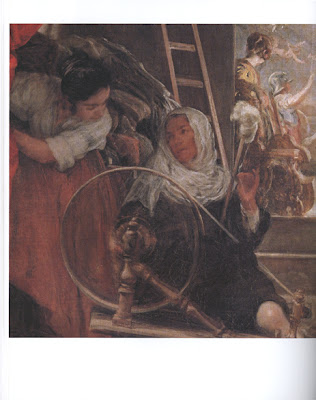 “Bitterly resenting her rival’s success, the goddess warrior ripped it, with its convincing evidence of celestial misconduct, all asunder; and with her shuttle of Cytorian boxwood, struck at Arachne’s face repeatedly.”  In the painting, Athena holds her shuttle in the foreground, not the background, but Velázquez cleverly placed it in Athena’s left hand where it points to the next image of Athena in armor.  Velázquez highlighted the goddess’s anger against a light blue background and emphasized the force of Athena’s striking arm.  Arachne’s head is nearly the center of the painting, but the viewer realizes she will exist no longer. “She could not bear this, the ill-omened girl, and bravely fixed a noose around her throat: while she was hanging, Pallas, stirred to mercy, lifted her up and said:

“Though you will hang, you must indeed live on, you wicked child; so that your future will be no less fearful than your present is, may the same punishment remain in place for you and yours forever!”  Then, as the goddess turned to go, she sprinkled Arachne with the juice of Hecate’s herb, and at the touch of that grim preparation, she lost her hair, then lost her nose and ears; her head got smaller and her body, too; her slender fingers were now legs that dangled close to her sides; now she was very small, but what remained of her turned into belly, from which she now continually spins a thread, and as a spider, carries on the art of weaving as she used to do.”   Note that the belly of Arachne which will be the spider’s core is at the exact center of the painting.

With the fable explaining the origin of spiders, it makes sense that the preparatory activity in the foreground is all about the thread (and the spinning of fate), because there is so much winding to that thread.  I interpret the young helpers to Arachne and Pallas Athena as the three Fates.  The Fates can be described as Moira in singular name, or Moirai. Their specific names are Clotho meaning “Spinner,” Lachesis, who measures the thread, and Atropos who is inflexible and cuts it off. The three Fates are goddesses and daughters of Zeus who are sometimes considered more important than Zeus in their ability to seal destiny.  They come in various disguises, and wouldn’t be surprising if these young women seen as helpers are really the ones who ultimately are in charge. In myth and life, there is always the question of how much free will or how much fate determines outcome.

Velázquez uses highlights and shadows strategically for his story telling goals.  Arachne stands out because she is highlighted to a much greater degree than Minerva is, yet we see nothing of her face.   How ironic that he, Velázquez who proudly showed his face in Las Meninas, his allegory of painting, does not allow Arachne to show hers.  Her back is to us, as she labors deftly and diligently. Both Athena and Arachne are barefoot. The goddess, who is older though not an old lady, even shows some leg!

One of the women in the background is looking back to the foreground, a complexity that pulls the composition together. Perhaps she had been the only one of three Fates who supported Arachne and was pulling strings for her.  The woman or Fate dressed in blue shows her back to the viewer, but she appears again immediately below in the foreground, though separated by stairs.  Here Velázquez has deliberately darkened her face in shadow, in deeper shadow than is necessary for the composition.  As in other Velázquez paintings, shadowed figures can signify that a character in the painting is an actor, an actor who is playing a role in an act of deception.  Though she aids Arachne in the guise of as a common peasant girl, her concern with thread could actually be in the process of spinning a different fate.

Velazquez was familiar with the fable of Arachne from a Peter Paul Rubens painting of Pallas and Arachne which was owned by the Spanish royal family. The Rubens composition is more violent, with Pallas Athena striking Arachne to the ground. A copy of this painting was in the background of Las Meninas, Velázquez’s most famous painting of 1656, a composition which raises the status of art and the artist. Velázquez must have thought of the art of weaving as a noble pursuit, similar to the art of painting.  Both require exceptional talent and skill.  Weaving and spinning have additional, magical connotations in mythology, such as the woven clothing of goddesses, the weavings of Odysseus’ wife and the thread which let Theseus out of the labyrinth.  Velázquez was a great artist, but, like the prodigy Arachne, he was not of noble birth.

Las Meninas — which contains a portrait of the artist in the act of painting — is about the role of the artist, the origins of creativity and the attainment of status.  The Spinners further explores these subjects and elucidates some of the same ideas. Our talents are divine gifts and, as mortals, there are limitations on us.  No matter what the artist’s genius is, there are warnings against boasting.  In the end, we are left with a reminder of the punishment which comes from carrying pride too far.

The paintings compare artistry and skill, and the status of the artist, to the non-negotiable status of higher beings, i.e., the Spanish Royal family, and an Olympian goddess. There is a crucial difference, however. Arachne, an upstart weaver, was just a girl when she challenged the goddesses of wisdom and weaving and the Fates. Velázquez, on the other hand, was 56 when he painted Las Meninas, and his self-portrait looks outward asserting the importance due to him.  Remember how Athena in the guise of an old lady had warned Arachne that with old age comes wisdom.

Velázquez had also been an extraordinary prodigy, only about 20 when he painted The Water Seller of Seville. There, an elderly man is passing a glass of water to an adolescent boy while a young adult man stands behind. It was nearly 40 years later that he finally gained knighthood status, the Order of Santiago. A red cross, painted on his chest three years after completing Las Meninas, indicates that title he attained shortly before death in 1660. However, from Velázquez’s other paintings, we know he treated royalty and peasant with equal respect and dignity. The old man in The Water Seller of Seville wears a torn cloak indicating his humble means compared  to the young boy he serves.  So it is not Arachne’s lowly birth, but her youthful pride which denied the wisdom of age that Velázquez sees as her ultimate downfall.  The attainment of greatness is possible if one waits, for only with age comes wisdom.

Velázquez’s stylistic change over the years from tight and controlled to very painterly is typical.  He painted two allegories of deception, one mythological, when he was around 30 and in Rome, a turning point in his career.   (You can some of the changes of his style from early to middle and late in a blog about him.)